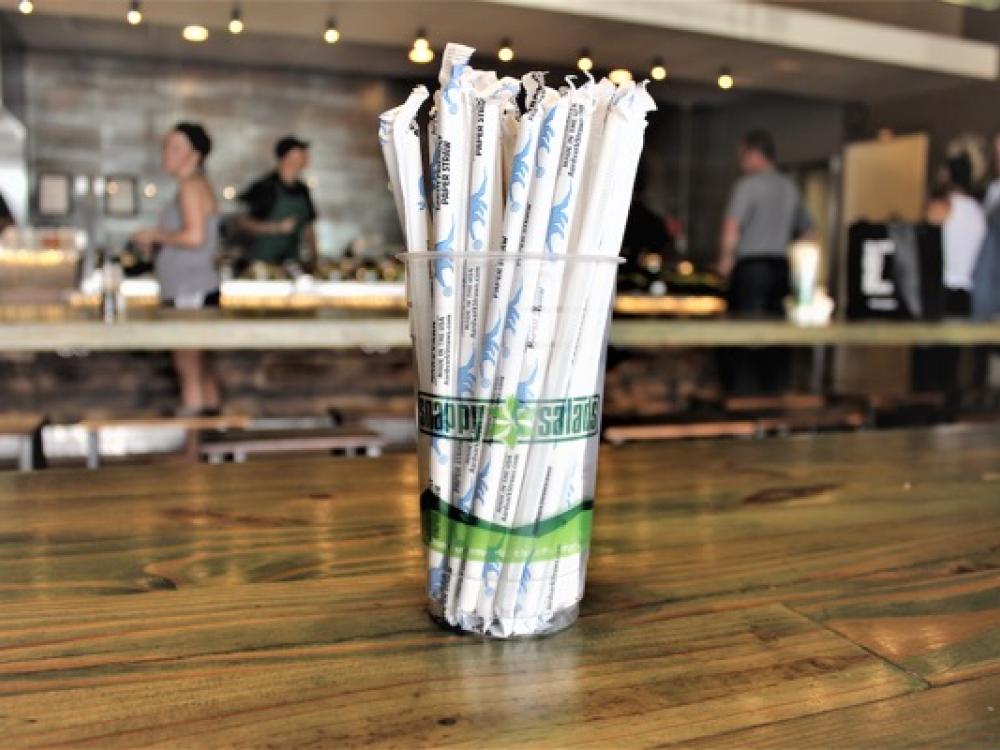 Dallas-based restaurant chain Snappy Salads was one of the first North Texas businesses to switch from plastic to paper straws in 2014. Courtesy of Chris Dahlander.

The grassroots campaign against plastic straws is gaining traction in North Texas. Two Dallas bar owners recently announced they are switching from plastic to paper straws this month.

Nell Scarborough, owner of Liquid Zoo, and Lee Daugherty, owner of Alexandre’s Bar, in Dallas, said they both made the decision based on environmental concerns.

“I’d seen the news story about how plastic straws are ruining the ocean and hurting marine life,” said Scarborough. “I said ‘We need to do away with this. I’m going to take a step forward.'”

Following her decision, Scarborough made a presentation to the Dallas Tavern Guild, an association of LGBT bars and nightclubs, and urged others to follow her lead.

Daugherty, also a member of the Dallas Tavern Guild, said he had already been researching ways to achieve zero waste. He'd performed a trash audit with help from Texas Campaign for the Environment and learned the majority of his bar’s waste could be recycled. When he heard about Scarborough’s plan, it gave him the nudge he needed.

“After recyclables, the stuff we’re left with is mostly beverage napkins and single use plastic straws. When Liquid Zoo made the announcement, we praised them for leading on this.”

He admitted there are challenges that may keep some business owners from jumping on the band wagon. Paper straws are not yet easily obtained through traditional suppliers and still cost more than plastic straws.

Chris Dahlander, owner of Dallas-based Snappy Salads, a local paper straw pioneer, confirmed that paper straws cost about three cents per straw as opposed to .06 cents per the plastic ones. They also require a lid with a bigger hole for the straw so it doesn't get pinched. He said making the switch in 2014 at Snappy Salads, which now has 17 locations across DFW, Austin and Houston, required a commitment to planet over profit.

“I figured we saved the world from 1.3 millon plastic straws since we started using paper straws,” he said.

One customer wrote him saying he hated the paper straws so much that he brings his own plastic straw to the restaurant.

“I’ll send them the YouTube video of the turtle having the plastic straw removed from his nose,” said Dahlander. “8 times out of 10, they’ll say ‘I didn’t know that.’ Most are just not aware or they don’t want to believe the stories.”

A video of two researchers removing a four-inch plastic straw from a Ridley sea turtle went viral on social media. Courtesy of YouTube.

Dahlander refers to the heartwrenching video shot by marine biologist and Texas A&M doctoral student Christine Feggener and fellow researcher Nathan Robinson. It shows the pair extracting a four-inch plastic straw from a Ridley sea turtle they captured off the coast of Costa Rica.

"Plastic pollution is a big reality for me, at least, because I see a lot of plastic and how turtles are affected by plastic," Feggener told the Tampa Bay Times. "But not everybody lives that reality."

According to the Plastic Pollution Coalition, more than 500 million plastic straws are used each day in the U.S. That’s enough to wrap the globe 2.5 times every day. They are not typically recycled, primarily due to their small size. Most end up in landfills, on roadsides or in waterways and oceans. According to the National Oceanic and Atmospheric Administration, plastic straws are one of the top five most common items found on shores during International Coastal Cleanups.

"We're seeing a lot in the news about plastic waste in the ocean," said Corey Troiani, director of the Texas Campaign for the Environment. "It's becoming a more visual problem, which is why were seeing this kind of response. People are beginning to connect the dots about where these things are going."

Dahlander said he feels proud he’s no longer contributing to those statistics. Simply refusing a plastic straw in a restaurant will make those around you think about the issue, he added.

“If we all do our small part, we can change how the earth is reacting to our impact. As far as I can tell, we have one planet Earth, we need to take care of it.”