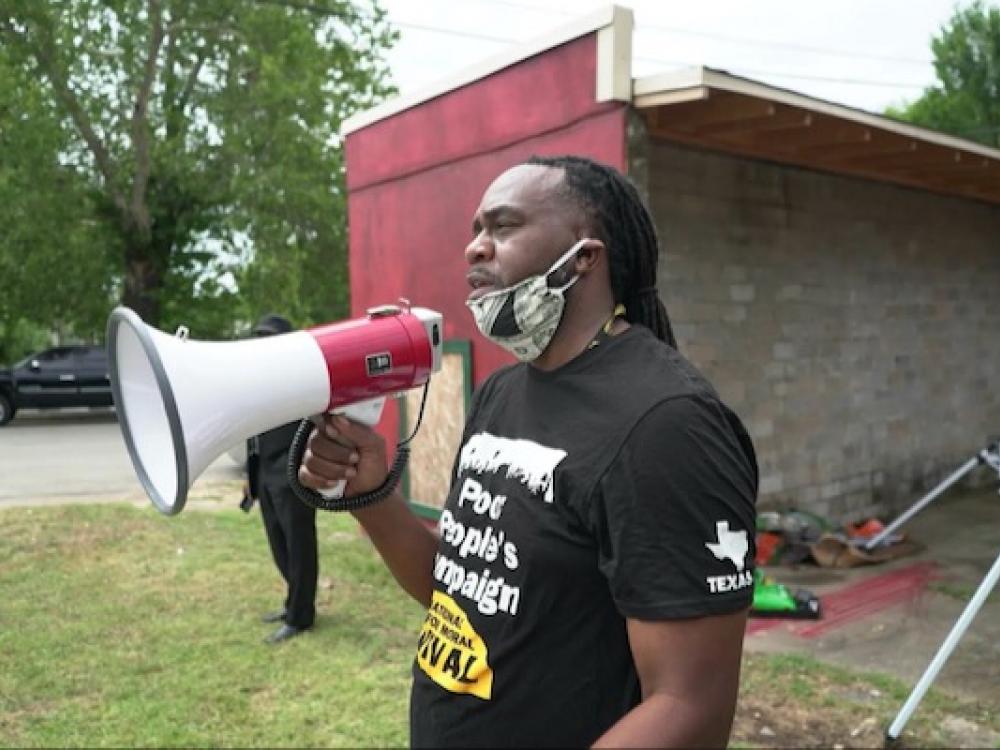 Marcus Russell speaks to the crowd at a Juneteenth Celebration hosted by the Texas Poor People's Campaign this summer. Photo by Michael Rowley.

Marcus Russell was one of three Dallas-area activists who received the Environmental Justice Award from the Texas Sierra Club on Saturday.

Among the trio, Russell stands out as having the shortest tenure in the green movement - but he’s making up for it in sheer effort. 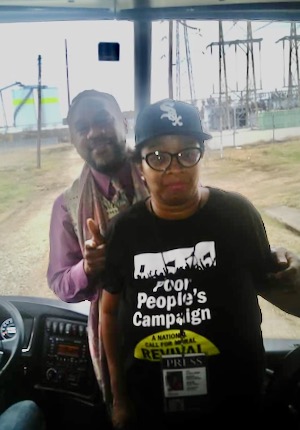 A resident of DeSoto, Russell was honored along with his colleagues Olinka Green and Bre Jackson for their leadership in organizing the Poor People’s Campaign Dallas Ecological Devastation Bus Tour last November. The tour brought Dallas-area residents with diverse backgrounds together to see first-hand what people face each day in the neighborhoods that have been degraded through neglect, air and soil pollution and illegal dumping.

The tour also caught the attention of PBS, which recorded the event for a documentary to be released in the near future.

Russell met his colleagues while volunteering for a local political campaign. It was only in 2019, when he made a bold move - leaving his job after 10 years with Dallas College to dedicate himself full-time to bringing justice to the people he feels have been cast aside.

Since then, he’s worked with the Texas chapter of the Poor People’s Campaign and the Dallas Sierra Club all while founding his own outreach, Commissary Is Very Necessary, to give families in some of the most underserved areas in Texas the legal, health and financial assistance they need.

“In 2019, I quit [Dallas College], I took my last check, I didn’t have any money, and on faith I paid for my 501(3)(c),” Russell says. “I got some help from North Texas Legal Aid. They did my paperwork. It's just been opening up, everybody sees our heart and what we do for the community and how much we love the community.

Russell said the organization provides education, empowerment and resources for families, youth and children who have relatives who have been incarcerated. He said they also fight to get people out of jail whether it’s due to immigration issues, juvenile detention or state and federal sentences.

"Marcus is truly a beacon of hope in troubled communities. I hope this award is helpful in bringing him more recognition and financial support for his work.” -Dick Guldi, Dallas Sierra Club

“We are an apartment-based organization. So mostly we go into the apartment complexes. We provide meals. We provide groceries. We always give out books. We always register people to vote. We do political education, and we try to get people politically involved and concerned about their community.

“We do community cleanup days where we'll go to the apartments. We do flyers and get other community leaders to come in and we just clean up the whole apartment complex. We also have what we call the community engagement specialist program where we have role models and stand up citizens go into the worst apartment complexes in these areas where there's crimes and murders and they walk around [and serve as] role models.” 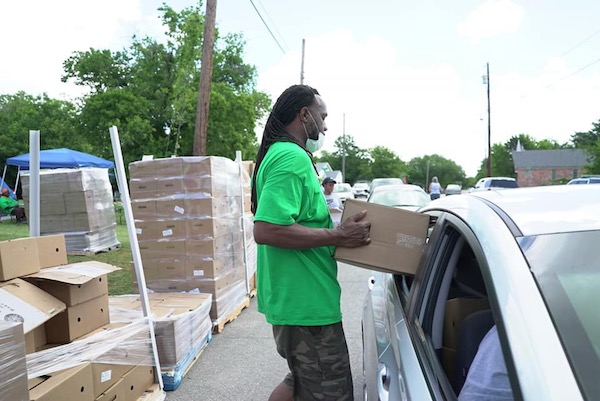 Marcus Russell distributes food from the North Texas Food Bank at a Juneteenth Celebration this summer. Photo by Michael Rowley.

Through CIVN, Russell has also organized health fairs throughout the underserved areas of Dallas and is now compiling data gathered from the events to show a correlation between major diseases and polluted environments. What’s more, as COVID-19 arrived on scene, CIVN reached out to the people in the same communities not only with the message about how to stay protected from the novel coronavirus but with masks and other personal protection equipment too.

“We do an environmental health assessment because we're trying to find the connection between environmental racism and the COVID-19 pandemic, and diabetes and other health disparities that are going on in these low income neighborhoods. Whether it is minorities, the elderly or the youth, which are people that are not really seeming to be cared about,” Russell says.

“We do an environmental health assessment because we're trying to find the connection between environmental racism and the COVID-19 pandemic, and diabetes and other health disparities that are going on in these low income neighborhoods."

Through CIVN, Russell also teaches other grassroots organizations how to qualify for available grants to fund their efforts. His goal is to raise up sustainable organizations and compound his own efforts through member nonprofits working to raise these impoverished areas out of the degradation they face and transform them into thriving communities with a quality of life comparable to what people in wealthier parts of Dallas demand.

It was through such community activism that Russell’s work has become intertwined with environmentalism.

His grandfather lived in the West Dallas area known for lead contamination from an old battery reprocessing facility, and Russell says he himself grew up in the Five Mile Creek area of South Dallas affected by lead poisoning. Therefore, he says he knows first-hand how people who are forced to live in unsafe conditions become unresponsive to challenges in their lives they feel they can’t change.

When he was asked to help out with the Poor People's Campaign Ecological Bus Tour, he saw immediately how the event could help with his efforts by raising awareness among diverse people to the outright crimes that are being committed against powerless communities where pollution, dumping and failing infrastructure rob residents of their own health and opportunity.

“We went to different ecologically devastated sites in Dallas. We went to Sandbranch, Texas where they don't have running water. We went to a [former] lead plating facility in [Dallas]. We went to Shingle Mountain. We went to West Dallas - we went to a lot of different areas,” Russell says. “And it was very eye opening for people from the north side of town, and it was eye opening for the people from the south side of town, because you have a lot of ignorance going on with both sides. You have people living in their little bubble in North Dallas. And then you have people in South Dallas who are living in these environmentally devastated areas, but they have no idea what they're living in.”

Richard Guldi, the member of the Conservation Committee for the Dallas Sierra Club who nominated Russell for the Environmental Justice Award, says he chose Russell because he knew of his life’s journey and regards him as a community organizer with a heartfelt mission. 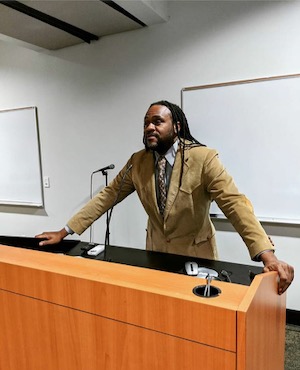 “I’ve always been impressed by the way Marcus cares so deeply for disadvantaged people. He's consumed with passion for CIVN because he wants every child to have a safe place to grow up, enough food to eat and a chance to learn and develop to their full potential,” Guldi says.

“Marcus was also remembering many other good people who've struggled against great odds only to be overwhelmed and give up. Marcus is truly a beacon of hope in troubled communities. I hope this award is helpful in bringing him more recognition and financial support for his work.”

Russell says CIVN is pointing the direction for community organizations to take up the cause of environmental justice. The success of underserved communities depends on removing barriers to a healthy environment, but all too often this correlation is overlooked, he says.