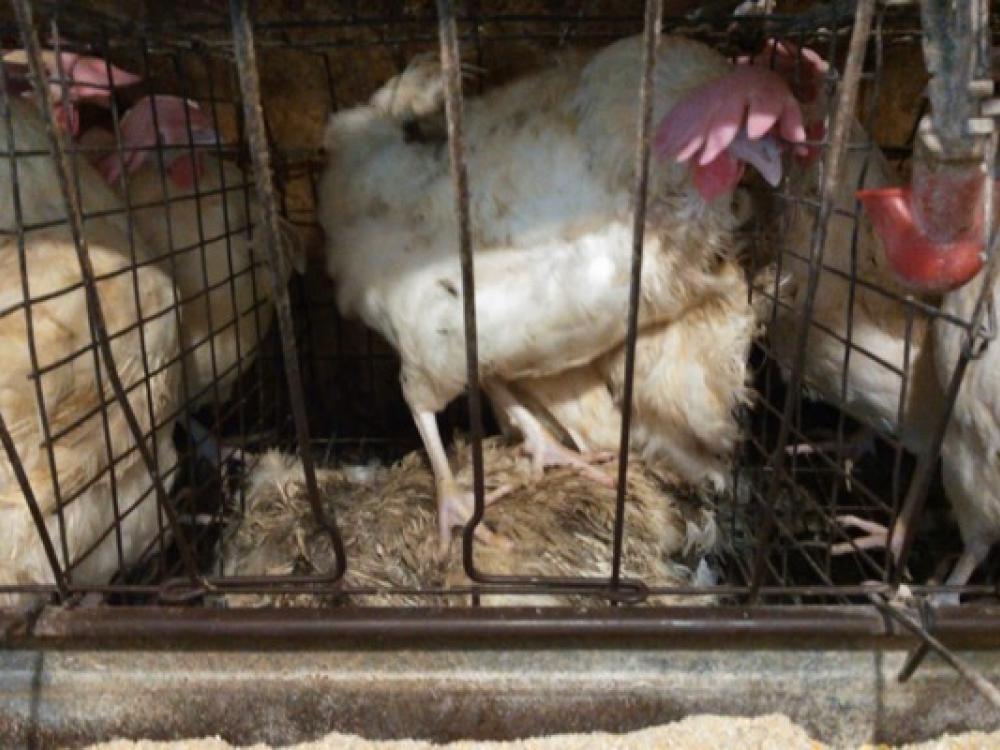 The video shot by a PETA whistleblower shows hens crammed into battery cages with dead hens at a Mahard Egg Farm location. Courtesy of PETA.

Kroger announced it is suspending ties to Mahard Egg Farm, based in Prosper in Collin County, after People for the Ethical Treatment of Animals released video footage showing hens caged with dead hens that had apparently died of heatstroke and hens beaten to death at one of its facilities.

The Mahard Egg Farm describes itself on its website as a “Big Farming Operation with a Hometown Feel.”

The facility near Sulphur, Oklahoma where the video was filmed houses 1.2 million hens and supplies eggs to Kroger, the largest grocery store chain in the U.S.

“This video is disturbing and difficult to watch, and this behavior is not consistent with Kroger’s commitment to animal welfare in our supply chain,” Kroger spokeswoman Kristal Howard told the Cincinnati Business Journal. “Mahard participates in the United Egg Producers Certified program for hen care. We were assured last week by Mahard’s leadership that they immediately initiated an internal review of farm operations and began re-training their team in proper animal care. While the investigation is being conducted, we are taking steps to suspend supply from the facility shown in this video. We have also asked Mahard to share their comprehensive corrective action plan and timeline with us, which we will review in partnership with animal welfare experts.”

The Cincinnati Business Journal reported that Kroger, which is based in Cincinnati, included an animal welfare policy in its 2018 Sustainability Report.

“Kroger has a long-standing commitment to responsible business practices, including the humane treatment of animals,” Kroger says in its policy. “We require our suppliers to adopt industry-accepted animal welfare standards that we endorse, and we monitor our suppliers for compliance with these standards. We align with the Food Marketing Institute’s industry-adopted and industry-aligned animal welfare standards for the following animal proteins: beef, pork, chicken, turkey and eggs. For nearly a decade, Kroger has convened our own independent panel of animal science experts to make recommendations on how we can work with the industry to improve animal welfare.”

Kroger’s policy also says it’s targeting a shift to get all of its eggs from cage-free chickens by 2025.

An employee of Mahard Egg Farm said they are aware of the video but could not respond to GreenSourceDFW's request for comment.