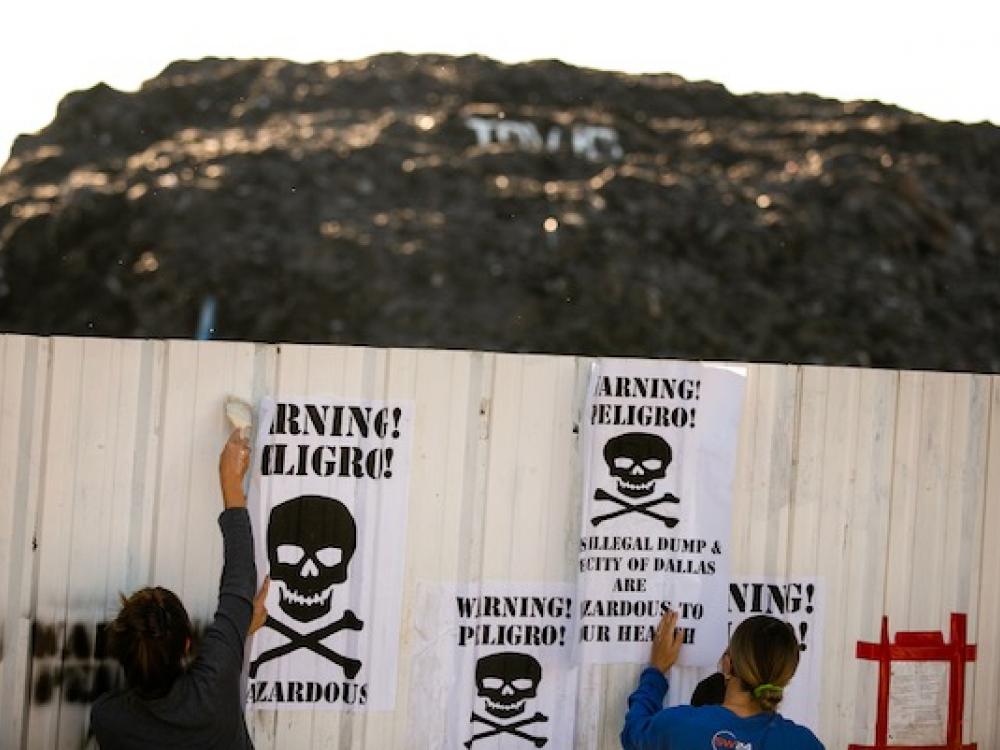 On Sept. 30, a group of activists plastered a fence at the illegal dump in southeast Dallas with posters of skulls and crossbones. The mock warning signs declared the site and the City of Dallas both "hazardous to your health."

The protest staged by Southern Sector Rising aimed to keep pressure on the city to remove the 70,000 tons of asphalt shingles at the 9500 block of S. Central Expressway amassed by Blue Star Recycling, which claimed to be recycling the material. 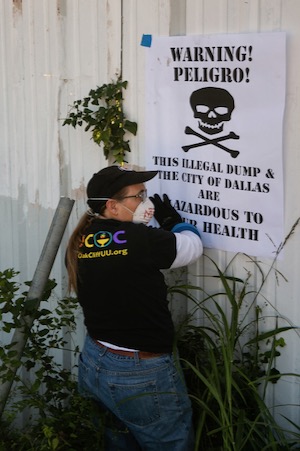 A protestor hangs a sign in front of Shingle Mountain. Photo by Andy Jacobsohn/Deep Indigo Collective for Green Source DFW.

The event was held on the eve of the deadline the group gave city leaders to move the toxic pile, which has been an eyesore and a health hazard to nearby residents for more than two years.

Living next door, Dallas resident Marsha Jackson has suffered respiratory, dermatological and neurological health issues. She has been petitioning the city to take action since 2018.

“When it rains, those high shingle piles shed polluted stormwater onto our yards and into the creek,” Jackson said at a press conference last year.

After a series of Dallas Morning News articles drew public outcry about Jackson's plight, in December 2018, the city sued Blue Star Recycling for code violations. In April 2019, a state district judge ordered the company to clean up the property.

However, so far, neither Blue Star nor the landowner, CCR Equity Holdings, has complied with demands to remove the shingles.

This summer, the city began to look into the cost of removing the refuse with hopes of recouping some of the money from the landowner.

In August, Southern Sector Rising, which Jackson and others formed to fight racist zoning, delivered a letter to city leaders demanding a clean up by Oct. 1.

According to the local Fox News station, the city of Dallas recently accepted a contractor’s bid of $450,000 to haul off the shingles to a nearby landfill.

“That's all words and no action until we have a clear timetable for a safe removal process,” said Evy Mayo, chair of Downwinders at Risk, which is working in partnership with Southern Sector Rising. “We won’t be assured the city is acting in good faith unless those critical details are publicly discussed." 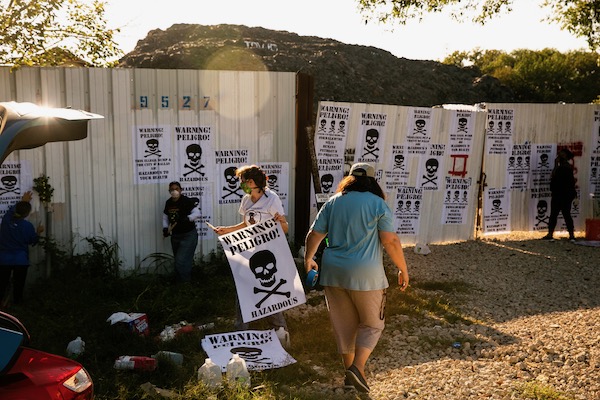 Deep Indigo Collective is a visual storytelling resource supporting news outlets reporting on the local impacts of environmental threats and the climate crisis. As a 501(c)(3) organization, Deep Indigo is proud to produce original visual journalism on behalf of our editorial partners across the United States.