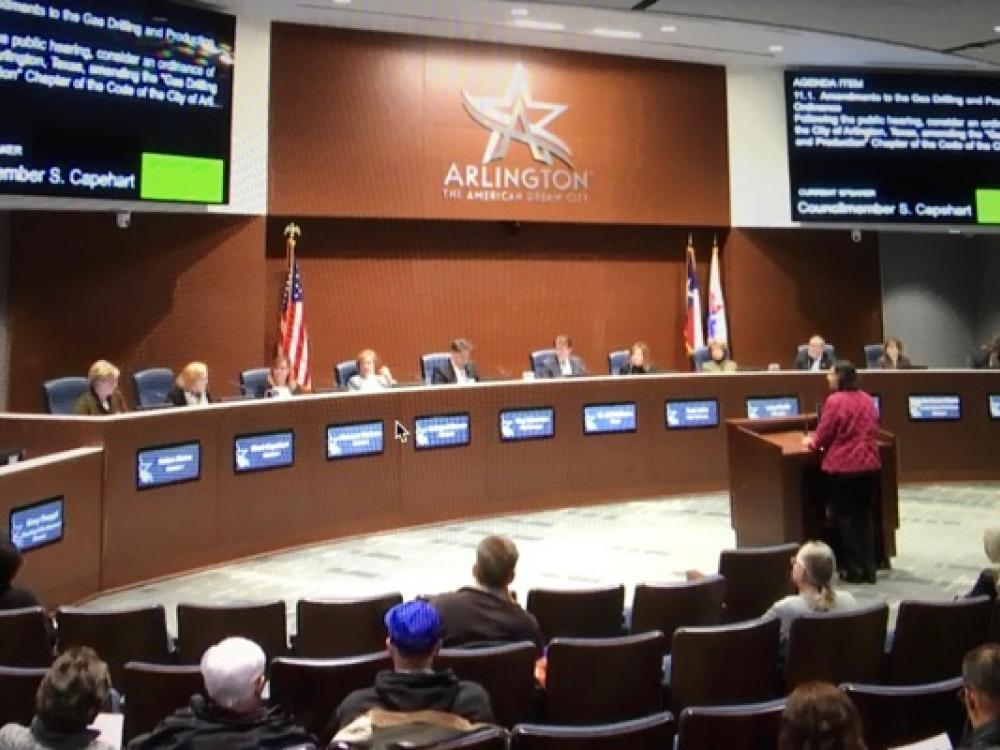 The Arlington City Council is updating the city’s gas drilling ordinance for the first time in nearly a decade but the revisions don’t do much to protect residents from the ill effects of gas drilling, according to the leader of Liveable Arlington, a citizens advocacy group.

Arlington’s gas drilling ordinance was established in 2003 and hasn’t been updated since 2011. According to City Council documents, the revisions are being proposed in response to pressure from citizens to make gas drilling safer.

Liveable Arlington formed in 2015 to lobby for stricter gas drilling laws and led a successful campaign in 2017 to stop a proposed disposal well next to Lake Arlington.

The leader of the grassroots group, Ranjana Bhandari, spoke at last week’s city council meeting where the first reading of the ordinance revisions passed 9-0.

“After spending years bringing you peer reviewed health research and FLIR videos of drill sites in Arlington and advocating for not reducing setbacks to less than our already highly inadequate 600-foot setback, we were hoping for real progress,” said Bhandari, at the Feb. 19 public hearing before the vote.

Bhandari admitted the revisions do offer some improvements to current law.

With regard to sound pollution, the amendments reduce the limit of allowable gas drilling noise from 5 to 4 decibels during the day and 3 to 2 db at night. Also, operators with two or more confirmed sound violations at a site using gas-lift compressors, other than electric compressors, located within 600 feet of protected use, will be required to erect sound walls.

In addition, the notification process was strengthened, requiring operators to notify residents of well servicing operations within 1,320 feet, at sites within 600 feet of protected uses. Likewise, the city’s radius for notification of publics hearings would increase to 1,320 feet from the drill site.

Some advances for air quality were made with electric rigs required for drilling when companies are drilling within 600 feet of protected uses. However, the ordinance allows for waivers.

In addition, truck staging is not allowed along residential streets to minimize the impact of truck traffic and presence within residential neighborhoods.

Bhandari said she’s concerned that several of the revisions address gas drilling under the current 600-foot setback rule, leading her to believe the city has plans to continue to giving setback waivers to gas drillers.

Currently the city’s setback for drilling is 600 feet but operators have continually pushed against it, repeatedly winning waivers to drill within 600 feet of homes, businesses and schools.

Bhandari criticized the city council for appearing to appease the gas drillers.

One revision actually streamlines the permitting process, allowing a gas drilling company to apply for a special use permit and a drilling permit at the same time. Currently a company has to wait to get a SUP approved before applying to drill.

Also, once a permit is approved, in the new ordinance the driller has two years to drill before the permit expires. The current deadline is six months.

Jane Lynn of Arlington was one of five speakers to speak in opposition to the revisions.

“This revised gas well ordinance changes absolutely nothing for me and my family,” she said “I need you to write something with teeth that will lesson the impacts of this heavy industrial activity in neighborhoods. Let’s put people over profits.”

Councilmember Robert Shepard pointed out that since HB 40 passed in 2015, cities cannot regulate subsurface activities of gas drilling. HB 40 is the state law that famously overturned the city of Denton's fracking ban.

During the hearing a representative from the Texas Oil and Gas Association spoke, saying they opposed the revisions despite having worked with City Council to craft them. She asked if the city attorney could meet with industry attorneys to vet the issues of concern.

Councilmember Shepard appeared to be shocked by the announcement.

He said the council had met with industry reps only two weeks prior and all of the revisions were agreeable to the industry at the time, with the exception of a proposal to require a super majority vote of seven to waive the city’s setback rule, which was tabled for later discussion.

“Now within a matter of two weeks [all of the revisions are] disagreeable - I’m kind of confused on the good faith nature of the negotiation.”

Bhandari too was surprised.

“The changes are very minimal. They’re commmon sense. [The City Council] actually excluded the controversial one - requiring a super majority to approve a setback waiver.”

However, Bhandari said she understood the city’s hands are tied.

“We appreciate that the city is trying to make changes within the constraints set by the state with HB 40. And we hope that we will get some relief legislatively so the city can have the power to protect the community from the toxic exposures and other risks from living close to drilling.”

The second reading and final vote on the revisions is expected to be held in March.

“This is a textbook case of how HB 40 has endangered a community such as Arlington," said Bhandari. "Ten or 12 years ago [when the ordinance was written] people didn’t know how gas drilling would play out, what those risks might be. Now I think we all understand.”