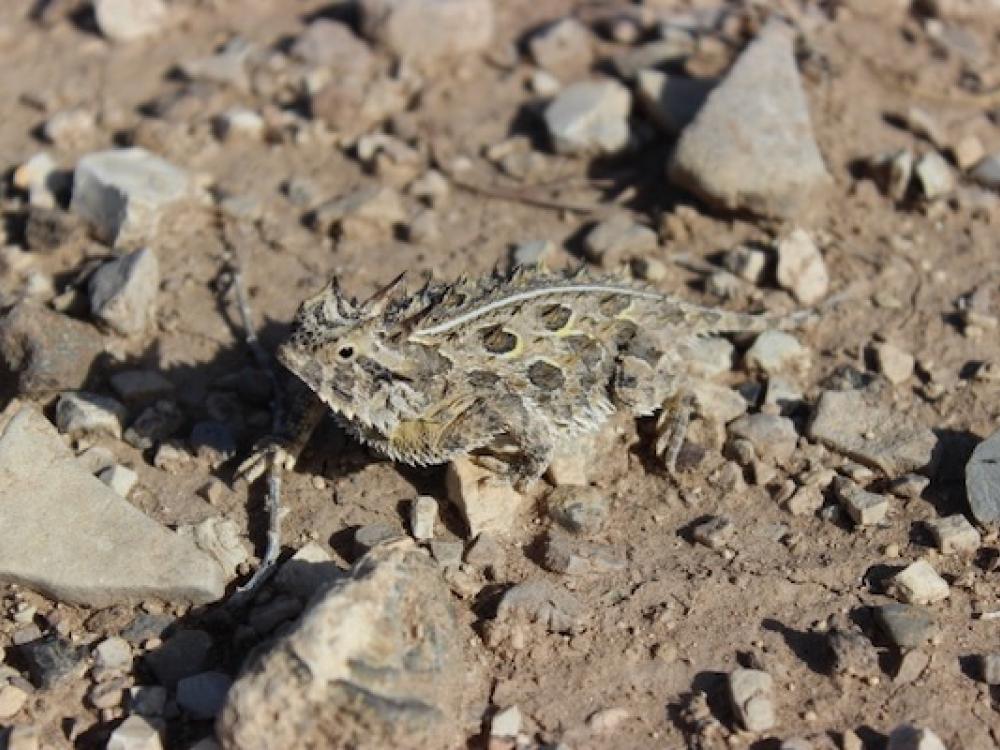 Above, an adult horned lizard in West Texas. The Fort Worth Zoo is among the institutions working to save the beloved reptiles. Photo by Michael Smith.

What has horns but is called a frog, is as rare as a unicorn in places it once roamed and is much-beloved by old-timers who remember them from their youth?

It's also called a toad but when you really come down to it, this humble critter is a reptile – the state reptile of Texas, as a matter of fact. A local university has even claimed it for its mascot.

It is the Texas horned lizard, Phrynosoma cornutum in the language of museums and field guides.

And for a while, it looked like those were the only places we would still see them — as specimens and textbook images.

Because around 50 years ago, they began to disappear from regions in Texas where we used to see them in back yards and parks.

Would it be as simple as catching some and letting them go where they disappeared? Could they be bred in captivity so that babies could be released in the wild? It turned out to be a tough, complicated problem.

Watch horned lizards being released this year at Mason Mountain Wildlife Management Area in Central Texas. Courtesy of The Fort Worth Zoo.

WHY DID THEY GO?

The Texas horned lizard is a complicated critter. It is one of 17 species of horned lizards found in the U.S., Mexico, and even a little bit of Canada. Historically it was found throughout most of Texas, except for the wetter eastern parts of the state.

The Texas horned lizard is well-adapted to live in relatively hot, dry places where it feeds primarily on harvester ants, those big red ants that clear a circle of dirt around the opening to their colonies underground. But you don’t see a lot of harvester ants these days, partly because the fire ants run them off. The less food, the fewer horned lizards.

“There’s no single smoking gun” to account for their declines explains Dr. Andy Gluesenkamp, director of the Center for Conservation and Research at San Antonio Zoo.

The zoo is a partner in the effort to breed baby horned lizards and release them where they might become re-established.

“Which factors are to blame depends on the area,” he added, noting that fire ants were a bigger factor in some places than in others. But Gluesenkamp agrees with others that “habitat availability and quality are the biggest factors.”

In particular, the Texas horned lizard does better with the native bunchgrasses that grow in clumps with a little space between them. For a lizard to make its way through a tight tangle of turf grasses is like trying to constantly climb through a jungle gym, with little chance to run away from predators or find food. And along with good grasses there must be the right kinds of soil, other plants that provide shade or shelter, and so on. Getting the habitat right is tricky business. 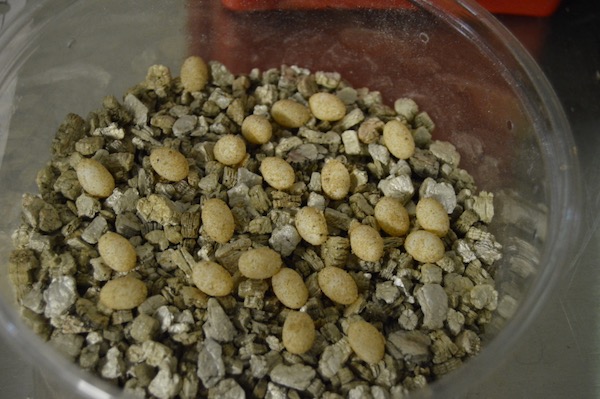 She is curator of ectotherms at the zoo, and she recalled the collaborative efforts between Fort Worth Zoo, TPWD, Texas Christian University — home of the Horned Frogs — along with other zoos. They put together a plan, with some initial efforts to bring horned lizards back near Weatherford and then Brownwood. But this was new, uncharted territory, and plans shifted as they got more experience.

Genetics expert Dr. Dean Williams at TCU began to sort out three different populations of Texas horned lizards: one that was particularly adapted to the south Texas plains, another in Central Texas and up toward the Panhandle, and a third in the Trans-Pecos of far West Texas.

In captive breeding programs, it was important not to mix lizards from the different areas. While they were all the same species, keeping each group within its own area helped ensure the success of efforts to reintroduce them. 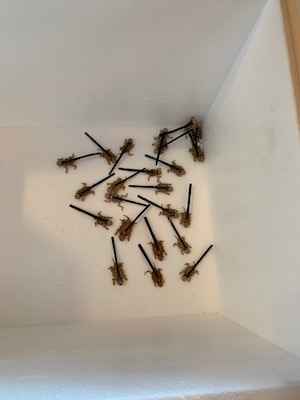 Hatchlings outfitted with their harmonic tags, ready to be released. Photo courtesy of Texas Parks and Wildlife Dept.

Researchers have to find as many as possible to see if their efforts are working. The babies are small and blend in with their environment very well, and so the researchers could not find many by just walking around and trying to spot them. Hatchling horned lizards are also too small to fit with radio transmitters, as is done in some wildlife research. Even very lightweight transmitters would weigh the lizards down, and the battery life is short.

One way to keep track of them is to attach a harmonic radar diode tag, which is a small strip that will bounce back a sort of “ping” when a researcher comes close with a gadget that sends out a signal. The Fort Worth Zoo attaches a tag to each baby so that it can be located later on.

Gluesenkamp, at San Antonio Zoo, is pursuing a different approach: train dogs to find them. He said that they initially have trained dogs to recognize horned lizard scat. Then the dogs can find the practically invisible little lizards by scent. Gluesenkamp said that the three dogs in the program so far all show aptitude. If this works out, baby horned lizards could be released without anything having to be attached to them, and that might give them a real survival advantage. 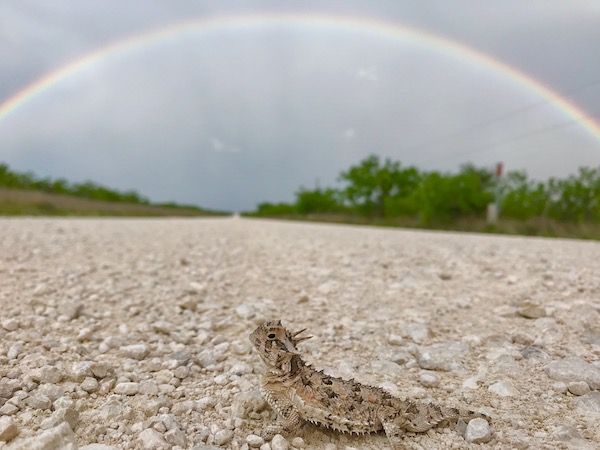 A Texas horned lizard resting on a road as a rainbow arcs over the sky. Photo courtesy of Texas Parks & Wildlife Dept.

All these efforts are bearing fruit. Last year, the Fort Worth Zoo celebrated the hatchling of its 1,000th baby Texas horned lizard. TPWD and partner zoos released over 200 hatchling horned lizards at the Mason Mountain Wildlife Management Area in Central Texas.

Barber reported that they are seeing lizards from releases three or four years ago, now grown to be adults. They even found some hatchling lizards believed to have been bred on the property from those released horned lizards. This is an important benchmark of success, indicating that the re-introduced Texas horned lizards are beginning to be a population capable of keeping itself going.

Nathan Rains proudly put it this way: “Lizards released two years ago as babies are now having babies!”

What does this success mean for the lizard’s old haunts, the playgrounds and parks around Fort Worth and down through Central Texas where we used to catch them?

When I talked with Nathan Rains of TPWD about a few places in the Dallas-Fort Worth region with suitable prairie habitat and ants, he said that some local reintroductions might become possible, depending on what they learn in the current work

“But it’s labor-intensive and it takes a lot of lizards,” said Rains.

“A reintroduction site requires 200 acres minimum and that’s if the surrounding area has habitat that’s OK,” he said.

Gluesenkamp is encouraged by what he sees as new generations of ranchers who are more focused on maintaining their land as healthy native habitat. Private ranch land with good habitat may offer growing possibilities for the return of the Texas horned lizard.

Whatever happens, the horned lizards have lots of friends rooting for them, including the Horned Lizard Conservation Society.

“HLCS has supported horned lizard conservation throughout North America since our inception in 1991, through grants, field surveys, and educational and outreach efforts,” said Mason Lee, the current president.

Their speaker series, The State of Horned Lizard Conservation, can be seen on YouTube.