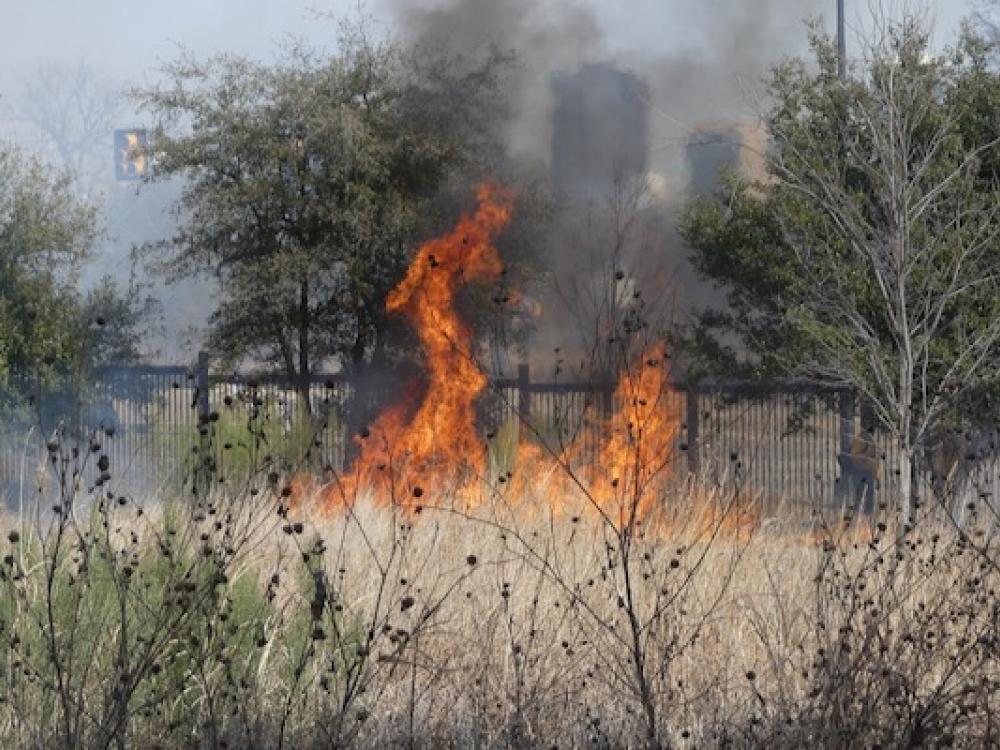 The Botanical Research Institute of Texas held a prescribed burn at its demonstration prairie last week. Photos by Michael Smith.

People driving by the the Botanical Research Institute of Texas in the Museum District of Fort Worth may have been alarmed to see flames on the grounds last week.

But the Fort Worth firefighters called to the scene were actually there to start the fire on purpose.

Why would BRIT want to torch their carefully curated demonstration prairie? Turns out fire is one of the keys to keeping prairies healthy.

A prairie is a community of native grasses and other non-woody plants that can remain as a prairie only as long as other plants don’t take over. Trees, shrubs and non-native plants are always ready to begin taking over, and burning is a way to keep them in check. Fires were historically started by lightning strikes or intentionally by Native Americans.

“All of those species that are part of that prairie know how to live with fire and it gives them the advantage," said Gunn. "Invasive species don’t know what to do with fire, and if it’s hot enough, it can suppress them.” 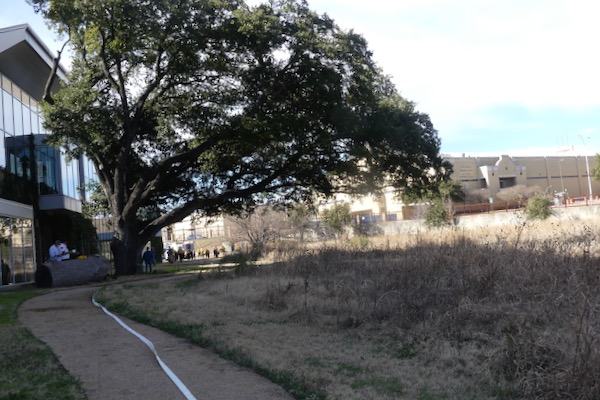 Fire hoses outline the area set to be burned. Photo by Michael Smith.

The idea for BRIT’S demonstration prairie dates back to 2010 when the state-of-art LEED-certified building was opened. The 2.5-acre plot along the northeast side of the campus was planted in 2011, a year when plants had to be hardy to survive the drought.

“This is a tough little prairie,” added Tracy Friday, BRIT’s vice president for education and volunteers.

To nurture the prairie along, BRIT tried lots of things. At one point they hand-cut the prairie with shears, mulched it and applied compost tea to boost the soil nutrients. In 2013, they even brought in a herd of horses to mimic the grazing bison herds.

What they had not been able to do, until now, was to use prescribed fire.

“Texas is naturally a wildfire-adapted ecosystem,” said Boe Adler, a task force coordinator for the Texas Forest Service. “[Fire] does a really good job of returning a piece of property back into its historical state.”

On the day of the BRIT fire, the team circled around the prairie, making sure equipment was in place and the conditions were right. Then, on the side near University Drive, the fire team used a drip torch to dribble fire into the grasses.

The flames grew, then shot up dramatically and just as quickly fell back down when the vegetation was burned. The team used fire lines to divide the prairie into three sections, with flames burning toward the center of each one and then collapsing. In about 20 minutes it was over and the area was mostly blackened and bare.

Fort Worth firefighter uses a drip torch to light the prairie fire. Video by Micheal Smith.

We are so used to the old TV spots in which Smokey the Bear exhorted, “Only YOU can prevent forest fires” and the idea that fires are never acceptable and always harmful. So it can be hard for us to wrap our heads around the idea that fire has a helpful role to play in nature. Periodic fire helps control invasive and woody plants that would take over the grasslands. It can also reduce the intensity of future fires.

When fire is suppressed, a woodland becomes thick with brushy growth that would normally burn back every few years. Built-up vegetation is potentially fuel for a fire, and when this “fuel load” is high, a fire can become very destructive and uncontrolled. Strange as it might seem, one good way to fight harmful, out of control wildfire is to have periodic burns that reduce fuel load.

A “prescribed burn” is the result of careful planning. The plan for the burn at BRIT required 17 pages describing what conditions would be needed and how to ensure that the fire was contained. The fuel conditions, natural barriers, wind speed and direction, and a host of other factors had to be just right. Any potential problems, such as smoke obscuring visibility on the adjacent University Drive, had to be addressed.

The margin around the prairie was mowed, fire hoses circled the area, and some of the perimeter was pre-treated with water. It was as if the team built a wall around the burn area so that the fire could not escape. 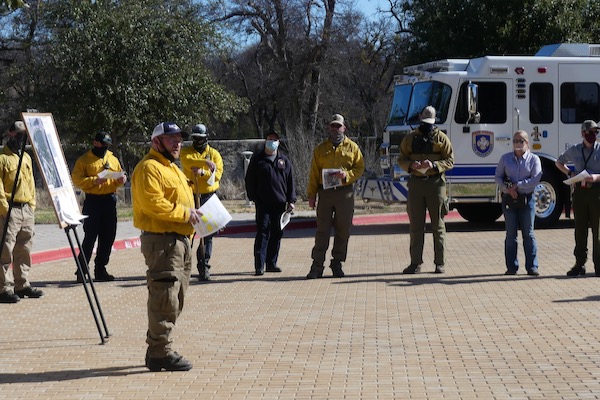 Daniel Price, natural resources manager at Fort Worth Nature Center and Refuge, was the “burn boss” which is just what it sounds like. The team had a military-like precision, with the Fort Worth Fire Department, staff from the Nature Center and BRIT all working together.

“I can’t ask for a better burn,” said Price, standing in a circle with other participants for a post-burn briefing. “We had really good fire behavior.”

Price was referring to the fact that the fire came up where it was supposed to and then quickly died down. The team started fires “around four sides of a box … the fire puts itself out” when those four sides came together.

To illustrate how prescribed fire can protect an area, Price showed me photos taken after the Bastrop fires of 2011. That had been a severe drought year, plagued with intense summer heat, and wind from a tropical storm helped trigger a massive fire. Photos taken later showed recovery after the fire. On one side of the photo was an area in which prescribed burns had occurred before 2011, and it showed good, healthy regrowth. The other side had not previously been burned, and the trees had been killed by the intense fire and the area was slower to recover. It appeared that earlier burns kept fuel loads down and prevented the wildfire from being as intense and destructive.

BRIT director of research programs Brooke Byerley Best and other staff researchers carefully documented the fire and will be measuring the results as time goes by.

Friday said that BRIT had already done a survey of the plants and had samples of soil microbes that were present before the burn. Now they will be able to see how that changes after the burn.

Friday was also excited about the potential for teaching kids about the importance of fire and how it can be used in this way. In the process, she said, they see how science, technology, engineering and mathematics is relevant in everyday life.

The knowledge can be helpful for ranchers too.

“We’re going to offer, when COVID is over, some classes on prescribed burns for adults who are landowners who might have a few acres they want to burn,” Friday said.

Horses 'make hay' at the Botanical Research Institute of Texas

Create your own pocket prairie