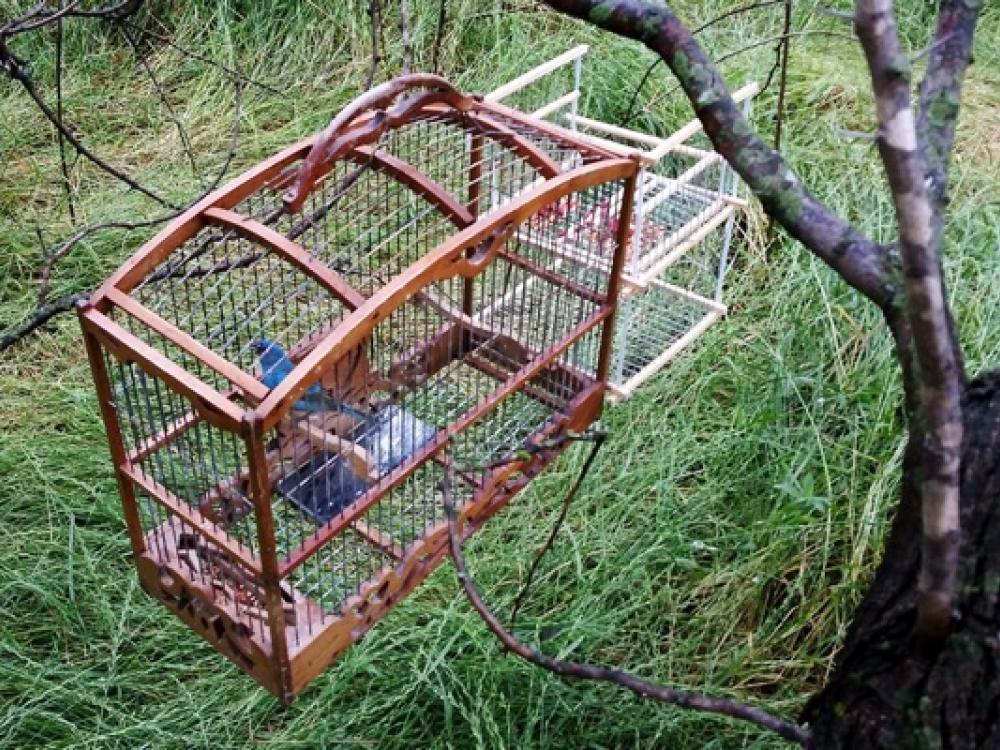 An indigo bunting was being used as a bait bird in a song bird trap discovered in River Legacy Park. Photo by Jim Sipiora.

He’d hoped an early morning rain shower had forced some migratory birds to stop along the West Fork of the Trinity River that runs through the park. But he hadn’t spotted as many birds as he had hoped. Around 10 a.m. on May 12, as he was finishing up his daily nine-mile hike, he saw the trap.

Further examination revealed a blue-feathered bird inside the cage - an indigo bunting. This was a serious “professional” looking trap. He’d never seen anything like it. But the songbird must have been caught sometime earlier. Now it appeared the male bunting was being used as bait to attract a female. 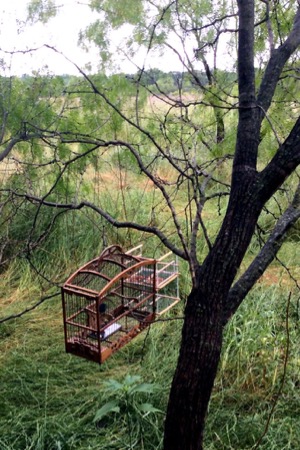 Sipiora looked around and spotted an Arlington Animal Control truck in the parking lot at the Collins Street park entrance. They said they couldn’t help with wildlife. Then he called Jose Aguilar, the Arlington Park and Recreation Department’s River Legacy supervisor, who rushed over and reached out to the River Legacy Science Center. They reported the trap to the game wardens at the Texas Fish and Wildlife Department.

Soon Game Warden Travis Porter arrived and took control. He let the trapped Indigo fly away free and he also confiscated the iPhone inside the cage.

“I’ve been with the agency for 17 years and this is the first time I’ve seen this kind of trap,” Porter said, who has spent most of his career regulating ducks and other game birds.

Birdnapping is a big business with birds being sold on the black market for $200 to $300 to people who want to keep them in a cage or use them in singing competitions. In the Caribbean, songbirds are also said to be tied to voodoo ceremonies.

The iPhone did lead to an Arlington resident who got a stern warning. Porter refuses to say more.

“It’s turned into a large-scale investigation with several agencies,” he said. 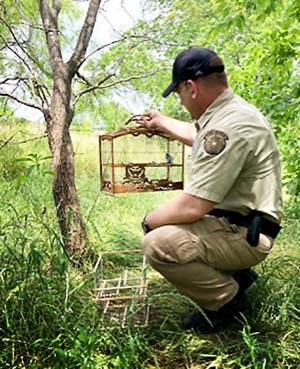 Sixty-two-year-old Sipiora says a few days after the discovery, he saw park employees searching over the entire meadow, but they never found any more traps. He also believes the “bait bird” had to have been caught earlier inside the park.

Aquilar says that the park and recreation employees now do daily searches for traps and have yet to discover any.

Birders have been posting online about the birdnapping and Fort Worth Nature Center Director, Rob Denkhaus, says they have never seen anything like this black market trapping. They do find traps, he says, but they are often built by kids, using a box held up by a stick at the end of a string. He even admits trying to trap animals when he was 10 years old.

“Trapping has been going on for years,” he says. “Naturalists really did capture animals for study and sometimes kids too do things. For all the right reasons but with the wrong results.”

Although birds are protected by the Federal Migratory Bird Treaty Act, National Geographic investigated birdnapping in Florida, finding 40 protected bird species were being routinely trapped. Aware of the growing problem in Miami, Florida State Legislature passed a ruling that went into effect in October 2019 protecting native songbirds with additional fines for possession of bird traps and possible jail time.

Songbirds like the indigo bunting and the painted bunting migrate from Mexico, flying throughout the eastern and midwestern region of the United States. Many however will simply stay in North Texas to build their nests, then in August fly south. (Dads leave first while mom waits for the chicks to learn how to fly and sing.)

Sipiora says he often hears some strange sounds in the summer as the young bunting find their “voice.” (Listen to the indigo bunting.)

Perhaps the birdnapping operation simply started as a way to earn some money and survive during the pandemic, when everyone was staying at home and out-of-work.

But birdnappers beware, Sipiora is watching out for the birds in River Legacy Park.