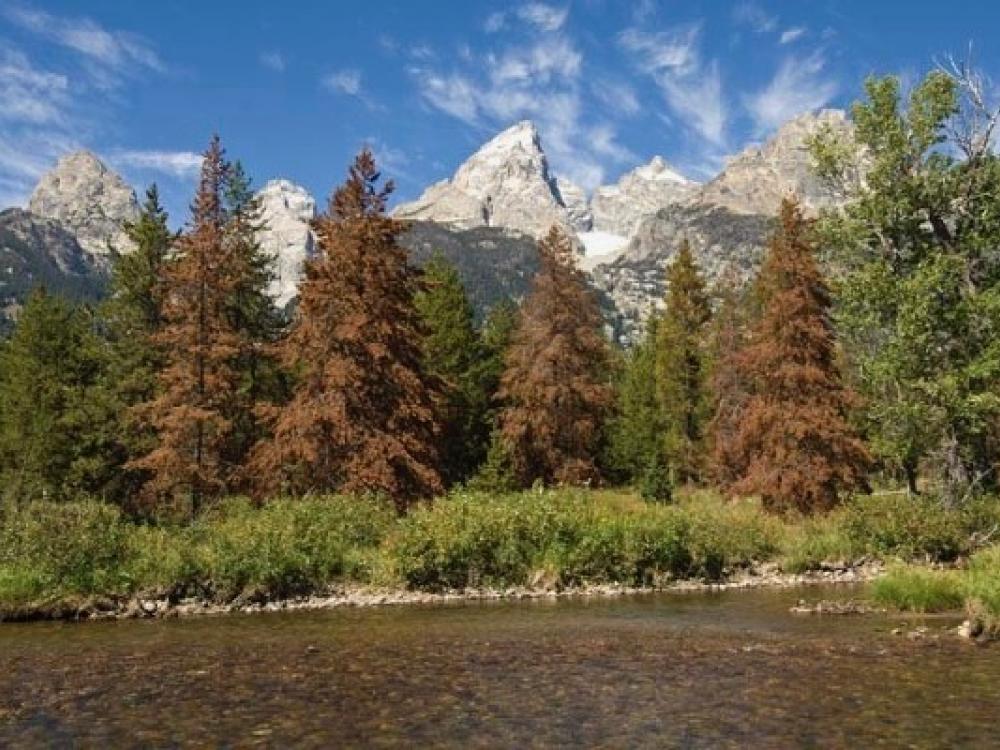 Above, at the foot of the Tetons, the mountain pine beetle has impacted less than half the trees. However, 90 percent of the white pine, which provides a major food source for grizzlies, has been wiped out in the greater Yellowstone ecosystem. Photos courtesy of Bruce Melton. 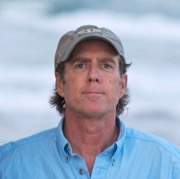 Recognizing that political leaders won’t fully take on global warming until it becomes a priority among voters, Melton wants to take climate change holdouts on a 30,000-mile musical tour of America to see the places where global warming has already begun to show what it will do to the planet.

Bruce Melton draws on his background as a scientist, environmental activist and musician for his film project.

He’s filmed the first 15,000 miles of his tour and now seeks funding to complete the journey. Once finished, Melton says, the film will feature a soundtrack of Austin Rock, blues, and folk with a twist of crooked jazz in showcasing the stunning imagery he’s gathered.

Entitled, This Land Is Your Land: Thirty Years of Climate Change Across America, the documentary is intended to bypass the mind’s resistance to new information by subtly associating the climate change message with visual evidence in a combination of video and lyrics that he feels has a much greater influence on viewers than facts alone. Melton has launched a GoFundMe campaign to help finance the film.

“We use songs with lyrics to weave a story and dispense with the majority of talking heads so common in documentaries,” says Melton. “Dispensing with the talking heads creates a markedly different feel from other documentaries, and presenting through music with lyrics uses the right side of our brains. This is one of the fundamentals of global warming psychology. Using the left sides of our brains has not worked out so well. The right sides of our brains however, the part that is responsible for beauty, creativity and emotion, can create a much stronger connection than can the left side based on logic. Basically, emotions are indeed stronger than logic.”

“We use songs with lyrics to weave a story and dispense with the majority of talking heads so common in documentaries.” 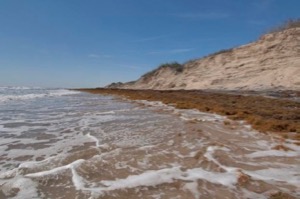 South Padre Island under non-storm conditions. During the Spring and King Tides, beaches around the world are under water. According to Melton, the reason we don't hear about it more is that the beaches that almost everyone visits are artificially nourished with dredged sand.

Additionally, he’s the director of Climate Change Now Initiative, a project that interprets the sometimes nebulous and gray findings of climate change science through the more black-and-white approach of engineering science.

“My research in stormwater pollution in the early and mid-1990s introduced me to the academic climate science literature and what I found was that the media was understating, not exaggerating climate scientists' findings,” he says. “By the 2000s the climate science understatements in the media were growing in extremeness and I began writing about specific pieces of journalism that were not reporting true to the research. By the mid-2000s I had formed the Climate Change Now Initiative as a part of my engineering consulting firm with the mission of providing plain English outreach on the latest science.”

From there, he became involved with the Texas chapter of Sierra Club, moving the organization to make climate change a priority. As a leader at the state chapter level, he says he’s had a better opportunity to shape the non-profit’s national agenda and show that reducing fossil fuel consumption alone is not sufficient for averting environmental degradation – a message that he intends to explain clearly in his documentary. 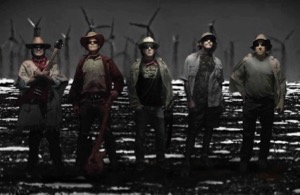 When complete, the documentary will feature the music of the Austin band, Climate Change. Melton is also a songwriter who plays rhythm guitar, blues harp and sings lead in the band. His credentials as a scientist, his work as an environmental activists and his penchant for music have coalesced into his current film project.

“The band has been playing together, mostly in its present form, since 2002 when we billed ourselves as a therapy group,” says Melton. “In 2007, we began working on climate relevant tunes in earnest. We are all a bunch of lifelong Austin musicians with varying amounts of stage experience and good day jobs, so we only play out for special events. Our main mission is filmwork for the Climate Change Now Initiative.”

The film is slated for release in early 2018, with or without funding, says Melton. Among its intended goals is to show real examples of how climate change has changed the country.

“We have more than 15,000 miles in the can from two observation journeys across the Rockies in 2015 and 2016 where we have found major forest mortality continues from the great pine beetle attack from 1998 to 2013 that killed most of 89 million acres of forest. The attack began in one of the biggest droughts ever seen in the West and though enhanced by fire control practices, if it were not for warming, the attack would not have been 20 times bigger than anything recorded. 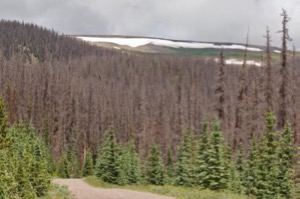 “Today the attack is different however. The main culprit before was the mountain pine bark beetle and their attack is waning because they have killed almost all of their main prey, the lodgepole pine. Today epidemic outbreaks of multiple species of spruce and fir beetles and budworms have taken the place of the mountain pine beetle. And even though normal and even above normal rain and snow have returned, the warm season is two thirds longer than it was in the Twentieth Century.

“Because evaporation in summer is literally scores to a hundred times more in summer than winter, drought can persist as it is not the amount of precipitation that falls, it's the amount that hangs around to grow things. When evaporation increases like it has with warming, we see what is becoming known as apparent drought.

“In addition to our beetle work, we have accumulated a significant amount of footage from sea level rise erosion along the entire length of Padre Island – the longest barrier island in the world – from desert and forest impacts in the low and high elevation of the Chihuahuan Desert in West Texas; from the Highland Lakes in Central Texas and several other lakes around Texas, from record or near record low water levels in the 2011 drought; and from the epicenter of forest mortality in the Central Texas Hill Country; from our 2011 drought that killed over 300 million mature trees, and where mortality continues from apparent drought today.” 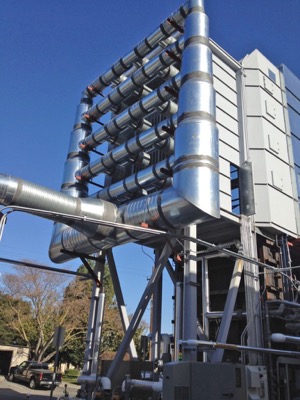 To finish the documentary, Melton wants to film the effect of West Coast beetle kill in the Sierra Nevada and Cascades after their record drought. Additionally, he wants to visit leading atmospheric carbon dioxide removal scientists and showcase their advanced work on industrial scale field trials of emerging technology that can sweep carbon pollution out of the atmosphere.

For perspective, he intends to also film the Big Melt again in Greenland, retracing a 2007 expedition path from Point 660 on the edge of the ice sheet near Kangerlussuaq, where the melt has been as high as 30 feet per year, to the Jakobshavn Icefjord and the most prolific glacier in the world near Ilulissat.

In the final leg of his expedition, Melton will film sea level rise erosion impacts during the King Tides in October between the Outer Banks of North Carolina and South Padre Island, Texas, through to Key West, Florida.

Melton says the message of the documentary is twofold: first, climate change has already affected the planet and is far worse than we see in the media; second, climate change solutions are much simpler and more economically affordable than we have been lead to believe by the campaigns of misinformation doled out by the fossil fuel industries.

“Thirty years of delay has allowed impacts 100 years ahead of schedule and 100 times more extreme,” Melton says. “This film’s 30,000 miles across the U.S. tells the story from remote and beautiful places where impacts are the most aggressive, and from the centers of climate pollution treatment science that can fix our climate but are untrusted because of the great debate about climate change.

This Land Is Your Land Indiegogo

“It is a documentary that focuses on the natural beauty of abrupt climate changes happening across America already. These are natural processes that happen every time our climate changes abruptly; [it] just so happens this is the first time we have seen anything like it. There is beauty in everything, but climate impacts hold a fascinating beauty that comes from the basics of life. When presented through the correct lens, awe and respect are developed instead of fear.”

Melton says his targeted audience is the general public that already shows an open mind in considering the facts of global warming. As to how he responds to the denialists who show now interest in facts and deem their uninformed opinions to be superior to scientific consensus, Melton says he has no time to waste.

“This is a brutal answer to most empathetic souls, but [the science of] global warming psychology says that because a vast majority believe climate change is real, it is better to use our precious time to convince those that already believe that the magnitude and risks from climate change are much greater and the solutions are much more simple, than it is to waste this time simply trying to convince nonbelievers of the basics.”

“Because a vast majority believe climate change is real, it is better to use our precious time to convince those that already believe that the magnitude and risks from climate change are much greater and the solutions are much more simple, than it is to waste this time simply trying to convince nonbelievers of the basics.”