AUSTIN -- Three days of peace, music and recycling -- it can only be Austin City Limits Music Festival, probably the greenest festival in the country.

ACL sets the standard for clean simply by offering a free festival T-shirt to any patron who collects a big bag full of cans, bottles and cartons. The result? The grassy fields of Zilker Park remain delightfully trash free throughout the festival, which is open daily from morning to nearly midnight and attracts a sold out crowd of 75,000 every day. 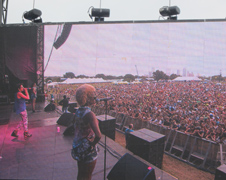 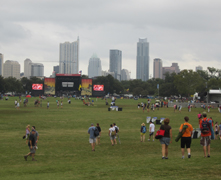 This is no small feat in a vast park rimmed with eight stages presenting more than 100 bands -- heavily rock but also folk, rap, gospel, alternative and electronic music -- including headliners The Black Keys, Neil Young & Crazy Horse and the Red Hot Chili Peppers.

Though that's less than half the size of the original three days of peace and music -- Woodstock -- it's still a lot of people who could easily generate tons of litter.

After all, everyone is permitted to bring in empty plastic bottles to fill with water, a mercy given the inevitable heat, and the festival also serves food and libations. A block-long series of restaurant stands dishes the likes of truffle-oil fries dusted with Parmesan cheese and Salt Lick barbecue, while several beverage stations serve beer in cans and water in cartons. 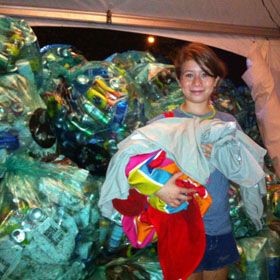 "The grounds are unbelievable after the audience clears due to the program and a responsible audience," says Emily Stengel, event services manager for ACL Festival producer C3 Presents. "Fans return each year excited to participate. Past Rock & Recycle shirts can be spotted throughout Austin on a daily basis, and people of all ages are thrilled to participate. One lucky participant even wins eco friendly wheels -- a Trek Earl bicycle."  (Photo Holly Haber)

The audience is vast and packed, including families, small children, aging rockers and plenty of University of Texas students. Some bring chairs, blankets and whimsical flags to mark their spots, but a healthy amount of space in front of every stage is reserved for standing room only.

Despite the masses, it's not hard to spot a towering Rock & Recycle sign propped up by a volunteer handing out translucent green bags, and it's even easier to see people of all ages scouting for empties to fill their bags.

"ACL is becoming known as one of the cleanest festivals because of this program," says Stengel. "We have included the Rock & Recycle Program since day 1. Festival producers used the idea of having a fan-incentive program to both encourage fans to recycle and to keep the park clean."

It's pretty brilliant -- the investment in T-shirts is far less than what it would cost to hire people to keep the place as tidy as the volunteers do.

The festival, which highlights key emerging artists as well as rock stars, is so popular that next year it's growing to two weekends -- Oct. 4 to 6, 2013 and 11 to 13.2013. If you're interested in going, keep up with www.aclfestival.com, because daily and weekend passes sell out fast.

Holly Haber is a Dallas freelance writer who contributes business and lifestyle features to Women’s Wear Daily, Dallas Morning News and other publications. She has been concerned about the health of the planet and its inhabitants for decades. In fact, her first professional job was managing the Human Bean Organic Food Co-op in Baldwin, N.Y. , in 1982.  Comments or suggestions? Contact: hollyhaber@sbcglobal.net