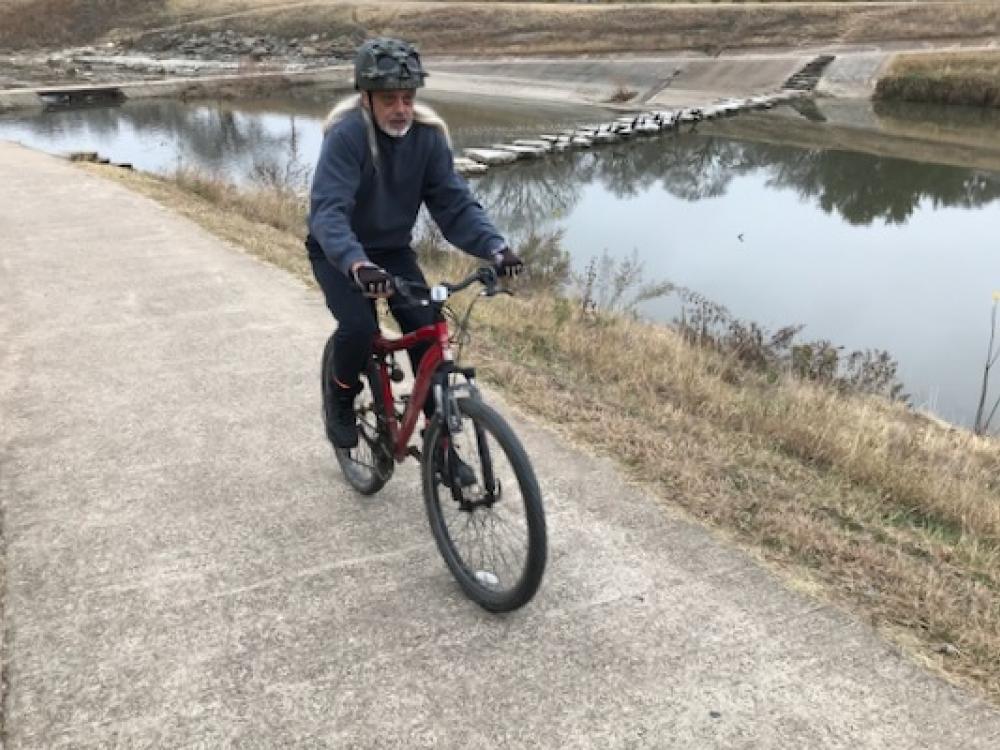 Biking enthusiast Tom Frye of Fort Worth rides the Trinity Trail along the Clear Fork in Fort Worth. Photos by John Kent.

For longtime Fort Worth resident Tom Frye, bicycling along the city’s Trinity Trails offers an unbeatable combination of exercise, recreation and stress-relief. He’s been doing it for at least 10 years, and as someone accustomed to undertaking hours-long rides, he’s intrigued by the thought of one day pedaling all the way to Dallas on a dedicated corridor.

“It's a great idea,” Frye said. “Connectivity is always good as far as sports activities are concerned. The potential for road trips over the course of several days would be amazing.”

Dallas and Fort Worth each host more than 100 miles of walking and biking trails, many of which follow local waterways, weave in and out of city parks and offer a welcome dose of tranquility amid the urban hubbub. Still, those picturesque paths won’t get you all the way from one city to the other. At some point, you’re dumped into car traffic in the nation’s fourth-largest metropolitan area. Good luck with that.

But a plan to connect the two downtowns via the Fort Worth to Dallas Regional Trail is now fully funded, and work on the remaining sections is either pending or underway.

Fort Worth Mayor Betsy Price, a renowned cycling enthusiast known for leading rides through city neighborhoods, is emphatic about the project’s importance. 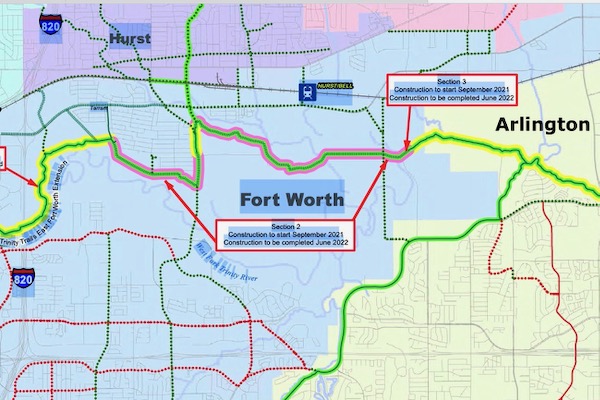 A map of the Fort Worth to Dallas Regional Trail shows the section between Fort Worth and Arlington recently approved by the city of Arlington. See interactive map. Courtesy of NCTCOG.

“The trail connection between Fort Worth and Dallas will lead to countless opportunities, including expanded transportation and connectivity options, as well as the added bonus of increasing the health and wellness of our residents,” Price said. “We have been working on this for more than five years and look forward to its completion with the help of [the North Central Texas Council of Governments] and neighboring communities.”

Most recently, on Dec. 1, Arlington City Council approved the execution of an interlocal agreement with the city of Fort Worth for the design and construction of a new, four-mile stretch of trail to connect River Trails Park in northeast Fort Worth with River Legacy Park in northwest Arlington. Fort Worth City Council is scheduled to vote on the agreement on Jan. 12.

The project’s main elements, a 12-foot-wide path and a pedestrian bridge over the Trinity River, will bring the Arlington and Fort Worth trail systems together for the first time. 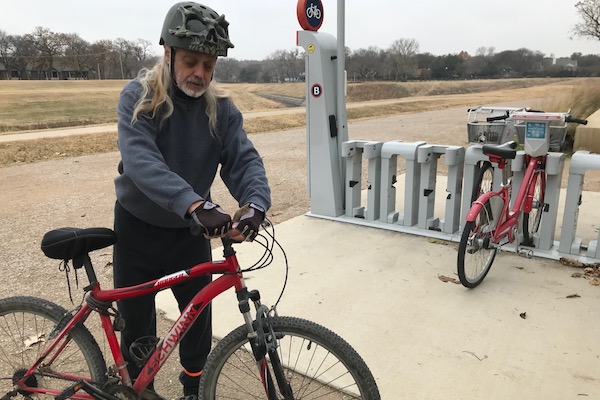 Once those two cities close the gap, about 30 miles of continuous trail (with the exception of a very short section under Loop 820 delayed by highway work) will link Panther Island in downtown Fort Worth to the western edge of Grand Prairie. An established network of pedestrian trails already connects Panther Island to points west in Fort Worth.

From the eastern side of Arlington’s River Legacy Park trail at State Highway 360, it’s another 26 miles to the Trinity Skyline Trail in Dallas by way of Grand Prairie and Irving. At the eastern terminus of the trail in Arlington, crews in February will begin constructing an extension that will feature a stop at the TRE Centrepoint/DFW station before diving south to join Grand Prairie’s Mike Lewis Trail. From there, users are eventually channeled along Irving’s south side almost all the way to the Dallas city limits.

Work to continue the path from Irving into Dallas already has started and will join the Trinity River/Elm Fork bridge at the Irving city limit with Trinity Skyline Trail (scheduled to start construction in April). Because the trails meander, the route between Dallas and Fort Worth will roughly double the 32-mile straight shot that I-30 offers.

The interregional trail network is an idea that’s been percolating for nearly a quarter of a century. 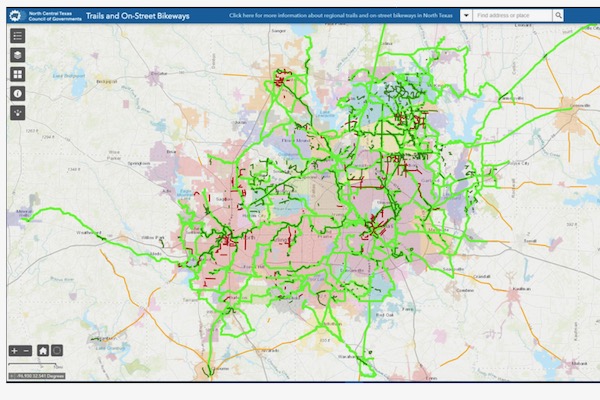 “A system of trails connecting Dallas to Fort Worth has been in the region’s Metropolitan Transportation Plan since 1996,” said Kevin Kokes, Sustainable Development program manager for the North Central Texas Council of Governments. NCTCOG is the coordinating body that works with local cities to develop what it calls “regionally significant” trails.

The Fort Worth to Dallas Regional Trail network received a boost in 2013 when the mayors of those two cities convened with the mayors of Arlington, Irving and Grand Prairie, and pledged to locate money to complete a trail system that would provide easier access to parks, nature areas, schools, jobs and neighborhoods in the five cities.

By October 2018, all funding had been identified. The trail’s main sections are expected to be completed and open by late 2023.

A secondary northern loop of the trail along Rock Island Road between Grand Prairie and Irving, with connections to two Irving TRE rail stations, is planned for completion later. 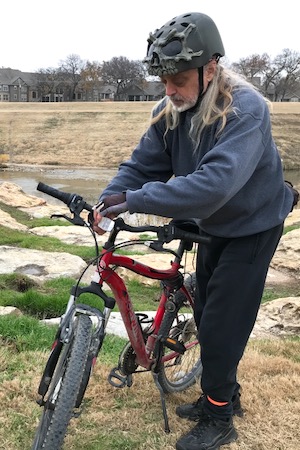 The Fort Worth to Dallas Regional Trail's main sections are expected to be completed and open by late 2023​. Photo by John Kent.

The hiking-biking-running-walking path joining North Texas’ two biggest cities is part of a larger system called the Regional Veloweb, an 1,883-mile network of off- and on-street, shared-use paths designed for bicyclists, pedestrians and other non-motorized forms of transportation. The Veloweb is an ingredient of Mobility 2045, the Regional Transportation Plan adopted in 2018 by the Regional Transportation Council. It comprises existing, funded and planned trails and bikeways, and “serves as the regional expressway network for active transportation, and it extends the reach of the region’s roadway and passenger rail transit networks for non-motorized transportation,” Kokes said. The Veloweb has planned connections in 10 counties and more than 100 cities throughout Dallas-Fort Worth.

The hiking-biking-running-walking path joining North Texas’ two biggest cities is part of a larger system called the Regional Veloweb, an 1,883-mile network of off- and on-street, shared-use paths designed for bicyclists, pedestrians and other non-motorized forms of transportation.

When users at last have an automobile-free transportation lane between the two principal Metroplex cities, a new problem will arise:

“I possibly would be tempted to try the full run, but also taking into consideration the fact that however far I ride I'm going to have to ride back,” cyclist Frye said.