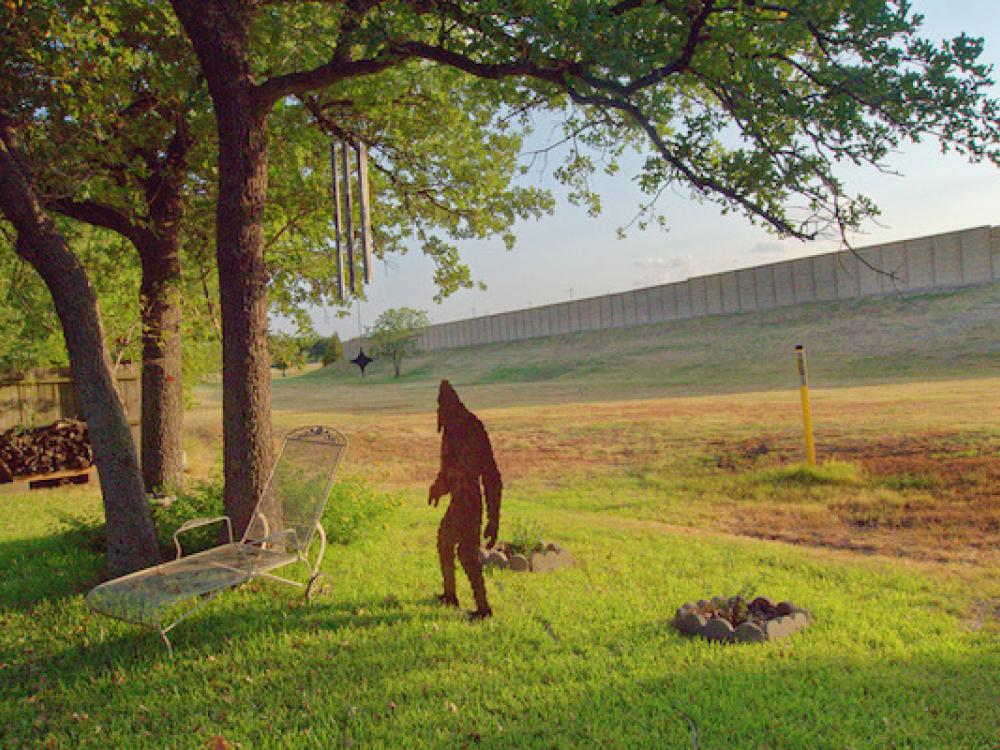 A homeowners' yard backs up to the Bruder gas well pad in southwest Arlington. Photo by J.G. Domke.

The city of Arlington approved 11 new gas wells next to a residential neighborhood in southwest Arlington last week and there was no City Council vote or public hearing.

There didn’t have to be.

In 2019, the city amended its gas drilling ordinance to allow administrative approval by the city’s Planning and Development Services department for new wells within an established drill zone. The city doesn’t even have to notify residents.

The drill zone, just 342 feet from homes, was established by Chesapeake Energy in 2012.

Total is a longtime foe of Liveable Arlington, a grassroots group fighting for stricter regulations of the fracking industry.

Ranjana Bhandari, the director of Liveable Arlington, says it’s reckless to increase drilling next to the residential neighborhood or anywhere else in Tarrant County, which is home to denser urban drilling than any other county in the state.

Bhandari says we now have a better understanding of the impacts of drilling and should not be rubber stamping new wells.

“Over the last 10 years, since that initial permit was issued, hundreds of peer reviewed published research studies have linked fracking to serious health impacts,” said Bhandari, in a letter to Arlington Mayor Jim Ross and City Council, dated July 22. 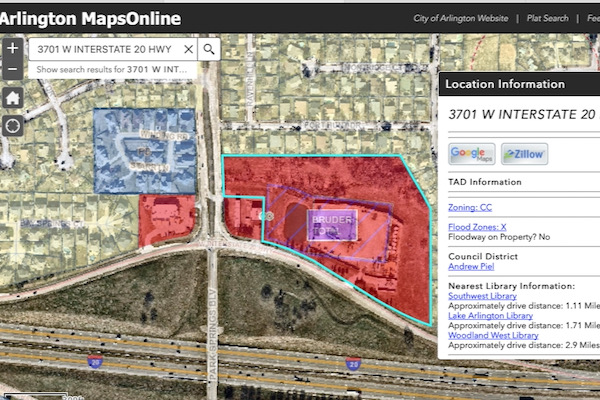 Eleven new wells were approved at the Bruder site (shaded red), at 3701 W. Interstate 20 in Arlington last week. Map courtesy of the city of Arlington. See interactive map, which shows the location of gas wells in the city.

According to the Oil and Gas Threat Map published by Earthworks and Frac Alliance, Texas has more than 5 million people living within a half mile of an oil or gas facility, the most of any state in the U.S.

In Tarrant County, nearly one million people are living within an half mile to an oil or gas facility — the most of any county in Texas. That's half the county's population.

The Barnett Shale geologic formation sits under 18 North Texas counties and holds one of the largest onshore gas fields in the nation. Its core mass sits under Tarrant, Denton, Johnson and Wise counties. A small portion is located in west Dallas County.

By comparison, in west Dallas County, where the gas field just touches, there are around 40,000 people living within a half mile of oil and gas facilities.

The Barnett Shale was discovered in 1981 by Mitchell Energy in Newark, in Wise County.

In 1991, the company drilled its first horizontal well. In 1997, they started using water instead of gel as a frac fluid base. While switching to water laced with frac chemicals can use millions of gallons of water per well, it cut costs in half.

Competitors began to hone in on the market and fracking expanded.

The number of drilling applications in Tarrant County approved by Texas Railroad Commission rose steadily from 128 permits approved in 2001, peaking to more than 2,000 new well permits in 2008.

But eventually, the Barnett Shale boom began to bust and by 2016, new drilling applications declined to a near halt, with only 25 approved in Tarrant County by the Railroad Commission that year.

That’s the same year that Total purchased most of Chesapeake’s Barnett Shale assets.

Bhandari warns that rather than drying up, drilling appears to be ramping up in Tarrant County.

Last year, 72 permits were approved by Texas Railroad Commission. Total, whose home country of France banned fracking in 2011, applied for roughly half of the permits. The other half were applied for by Oklahoma-based Sage Natural Resources.

Bhandari says when the gas boom began, much was unknown about the dangers of living next to fracking sites. Recent articles from Harvard School of Public Health, Stanford and Yale School of Health show the research is ongoing.

Many North Texans were lured into signing contracts with drillers, with promises of big bonuses and gas royalties. When homeowners began complaining of earthquakes, contaminated groundwater and flaming faucets, a grassroots movement against fracking rose up.

Today, there are 52 active drill site in Arlington and more than 500 in Fort Worth. Drill pads dot the western part of the Metroplex — persistant industrial eyesores in suburbia. 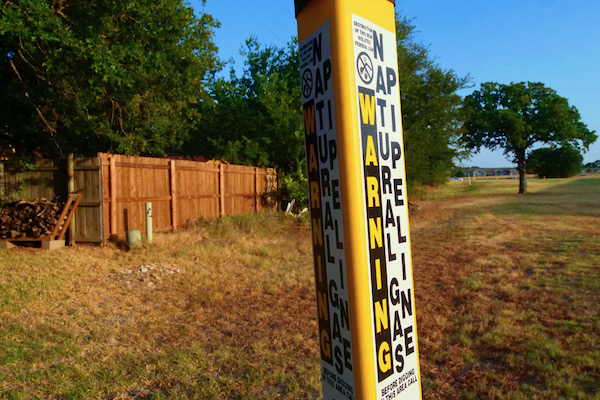 An underground gas pipeline winds past homes next to the Bruder site in southwest Arlington. Photo by J.G. Domke.

Meanwhile, Liveable Arlington is one of the few advocacy groups dedicated to fighting fracking.

Some others, like Frack Free Denton, became discouraged by the passing of Texas House Bill 40, which overturned Denton’s fracking ban in 2015 and limited cities ability to regulate the industry.

HB 40 is also cited by municipalities as one of the reasons they don’t do more to tighten restrictions on fracking.

“The City Council may, and does, factor in health and many other considerations when making a decision about the location of a drilling zone,” said Richard Gertson, assistant Planning and Development Services director in Arlington. “The Council balances all of those considerations with its limited authority to regulate gas well drilling in a manner that is commercially reasonable. However, regardless of the reason, Arlington may not enact a ban on drilling within the city. The State of Texas also considered the health and safety of the public when it adopted HB40, which preempts cities from enacting a total ban.”

But Bhandari says the local government has become too complacent.

“We're not going to stop [fighting gas drilling] just because the city is so unwilling to fulfill their end of the responsibility here,” she said. “People who’ve lived next to it know what it means to have wells being drilled behind their houses. It’s pretty horrendous.”

She points to a Fort Worth neighborhood that reported loud booms, air pollution and cracks in their homes when Total drilled four new gas wells in their neighborhood.

She also cited a recent case, where an entire Fort Worth neighborhood experienced a shower of toxic chemicals coating homes, vehicles, and yards, trees and vegetation dying within days, as well as a power shutdown because of potentially dangerous explosive conditions.

“I have a really, really passionate letter to the City Council from somebody whose house backs up to the Bruder site. You can see the depth of their misgivings and anger about it,” said Bhandari. “What has happened for many people is they understand the city is just going to talk their way out of it and not do anything. So people feel that there's no remedy. What can they do? And for me personally, that's not good enough.”

In contrast, in 2020 when new well permits next to a daycare center in East Arlington were located in a new drill zone, triggering a public hearing and City Council vote, residents pushed back and the permits were denied.

“The city does not want to hear from these people. That’s why they’re not doing a public hearing [for the Bruder site]. They are trying to silence that opposition, that discontentment, the lived experience, the harm — all of that. They're trying to wipe it out of the public square.”

She said the local and state government is making a mistake by prioritizing corporations over people's welfare.

“That complete short-sightedness is harming our children. That’s why we keep this up.”