For decades, the rocky woods and grasslands along Ten Mile Creek served as a nature retreat for residents of Duncanville, as well as Cedar Hill, Desoto and southwest Dallas.

The creek runs bright and clear through limestone ledges, sometimes spilling its banks to form small wetlands. River otters frolic in the water while great blue herons stalk fish. Beyond the riparian woods, hawks and owls hunt in open areas where scattered wildflowers bloom for pollinators. 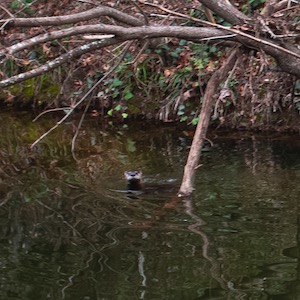 Now the fate of this natural oasis hangs by a thread, say a group of advocates. With the land’s future at stake, the Ladd Preservation Advocacy will present a petition of signatures to Duncanville City Council on Tuesday, March 1, at 7 p.m. at Duncanville City Hall, 203 E Wheatland Road. Their speakers and others will make their case why the city should preserve the land in its natural state.

The 42-acre site sits in a triangle of land, bounded by Cedar Hill Road, West Danieldale Road and South Sante Fe Trail in Duncanville. The property was given by Bob Ladd in 1998 to the city for "purposes related to the promotion or advancement of cultural, artistic or educational objectives."

But the deed language uses the term "primarily," says Duncanville city council member Jeremy Koontz, "which has been interpreted by some as saying 49 percent of the property could be developed however we want."

While the rocky land has been spared from development, it has remained popular with residents and others as an informal nature preserve — the only significant parcel of undeveloped land in Duncanville. But as development proposals continued to arise, activists felt an official designation was overdue.

"Support for preserve has been overwhelming," says Koontz. "Just about every single citizen I talked to about it say they want to see a preserve."

According to the Duncanville city charter, if there's an initiative that the citizens want, such as an ordinance or law they want to be passed, if they collect at least half the number of signatures than voted in the last mayoral election, then it would force the city council to make a decision based on the language of the petition. In this case, the proposal would be to establish the property as a nature preserve. So the council could adopt the petition's language into an ordinance, or the council could put it to a city vote.

There are currently over 1,800 signatures on the activists' petition. Around 2,100 people voted in the last mayoral election. 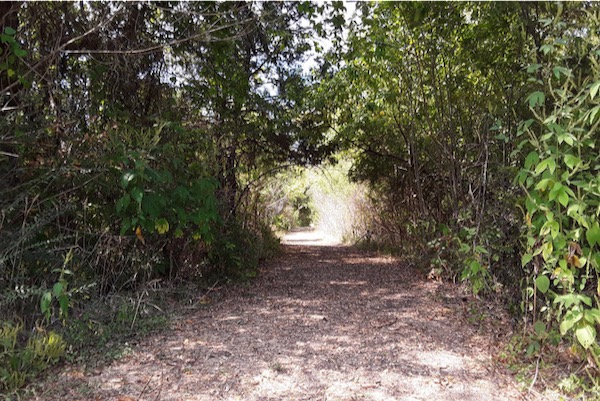 A trail runs through the Ladd property in Duncanville. Photo by Jeremy Koonz.

"I've talked to the Trust for Public Land," says Koontz, "and their evaluation shows that that segment of the city is a parks desert, lacking a park or green space within walking distance of their home. That shows that area of the city desperately needs open, natural space. Duncanville is 95 percent built out," notes Koontz, "so we're down to about five percent. And once that space is gone, it's gone and we'll never get it back."

Citing the Proximate Principle, developed by John Crompton of Texas A&M, activists maintain leaving the land in its natural state raises property values, and thus tax revenue, of nearby residences and businesses.

"Over 95 percent of residents in the surrounding neighborhoods of Swan Ridge, Skyview Estates and Santa Fe Village are opposed to any kind of development on the Ladd Property and desire the land remain in its natural state," according to the Ladd Preservation Advocacy. 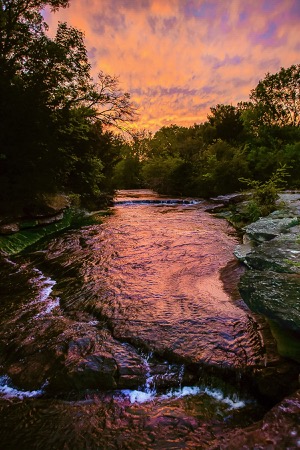 Mark K. Graham helped initiate preservation efforts by posting photographs of Ladd on the neighborhood Nextdoor social media and leading hikes on the property. A dedicated group walked door-to-door getting signatures on a petition for preservation. Dante York created a blog about the property. Jim Jones has served as informal spokesman.

“The Ladd Preservation Advocacy’s core of about 20 people and the most diverse group of people in the world, every political party, ethnicity, social strata, you name it there," says Koontz. "If you met them individually, you wouldn't think that they could get along. But each individual has found some way to contribute to the group effort. It demonstrates what can happen a bunch of people decides to put aside all their differences behind a common goal that's virtuous and good."

As a longtime environmental reporter, master naturalist and author of Wild Dallas-Fort Worth, my appraisal is that the Ladd Property serves as a vital link in the preserves and greenspaces along Ten Mile Creek and creates a potential wildlife corridor connecting to the Trinity River. It is also key to the area’s nature tourism potential.

A LITTLE SLICE OF HILL COUNTRY

The Ladd Property is a rich, biological jewel. Sam Kieschnick from Texas Parks & Wildlife started an iNaturalist project to showcase its unique floral and fauna. When Graham started walking the land a decade ago, he was struck by how it evoked the Hill Country with its wildlife richness and sparkling limestone waters.

Lancaster is second with Bear Creek Nature Park and Ten Mile Creek Preserve. Paul S. Dryer Nature Preserve at Windmill Hill in Desoto is a big attraction. Altogether they make an impressive destination for hikers and nature lovers from a wide area. Of the southwest suburbs, only Duncanville lacks a preserve.

Ladd Preservation Advocacy members are eager to participate in rehabilitation efforts, returning fields once farmed back to Blackland Prairie status to beautify the area and support birds and pollinators. Butterfly gardens are envisioned.

"So it's also a project," says Koontz, "of not only saving what's there but hoping to restore what's been lost." 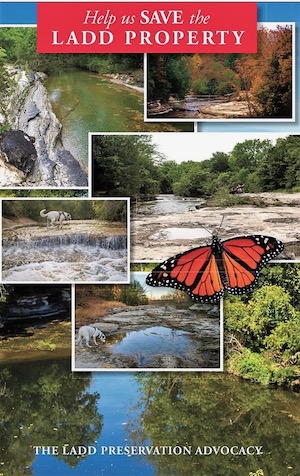 A flier created by the Ladd Preservation Advocacy group showcases the beauty of the natural area.

Activists involved with Ladd Preservation Advocacy envision slowly improving the site with trails through the woods providing creek access while steering visitors away from sensitive areas. School children on educational field trips could use the trails and receive naturalist lessons in an outdoor classroom.

But infrastructure is also needed, with parking spaces, a restroom facility (essential for schoolchildren visits), and methods to connect the north and south halves of the preserve.

"We get questions all the time how much might this cost or how would this be done? But if this is something that the citizens want to see happen, and it's their priority, then it's something that the council should want to happen because we represent the citizens," says Koontz. "We have a very talented and capable city staff, parks department, and finance department. I have confidence in them that they could capably execute it and find the funding. It comes back to whether or not this is a priority for the city council or not."

Koontz hopes to partner with the school district, saying a major part of preserving the land is its educational component. He envisions a nature center where kids can go on field trips and interpretive signage that educates visitors about the local ecology and the importance of keeping our creeks and waterways clean. Visitors could also learn about the land-use history and the Native Americans and pioneers that settled around the creek.

“It's just such a major educational opportunity.”

Everyone who agrees this nature space should be Duncanville's first nature preserve are urged to attend the March 1 Duncanville City Council meeting. Arrive no later than 6:45 p.m. to sign in to speak. Or you can email comments to the city secretary, Kristin Downs, by 4 p.m. on March 1, to be read by the mayor at the meeting. Email kdowns@duncanville.com and put “Citizen Comment for March 1 Meeting" in the email’s subject line. Include your name and address.

For background on efforts to preserve the Ladd property, visit the Ladd Preservation Advocacy blog. The latest news can be found on the activists' Facebook group and Facebook page.