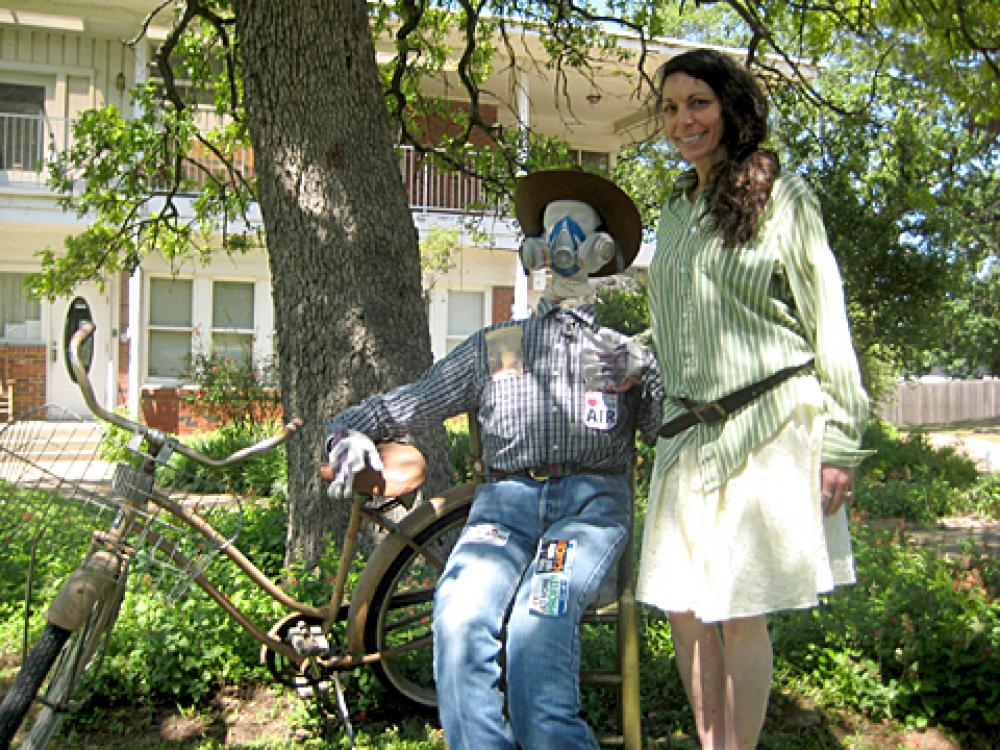 Kim Feil doesn’t mind making a scene when it comes to gas drilling.

In one appearance before the Arlington City Council, the Arlington-based activist “rapped” her complaints about gas drilling a cappella two years ago.

She followed that by demonstrating how to put on a gas mask in case of a fallout.

At public events, she often shows up dragging her gas-mask wearing doll, “Ben Zene,” along.

To garner more hits on her blog, she recently posted a paparazzi-style video she filmed of her city councilman.

“I’m a sensationalist,” she admitted.

Feil, who lives two blocks from a gas drilling site in Arlington, said her antics come down to one purpose: She wants to make sure gas drilling is safe.

No stranger to the hazards of living around the oil and gas industry, she grew up in south Louisiana and worked for a medical supply company in Norco, Louisiana, nicknamed “Refinery Row.”

Despite her radical reputation, early on she adopted her parents conservative views and voted Republican in every presidential election until 2008.

It wasn’t until the 1990s when she moved to Arlington, away from the oil industry culture, that she “blossomed” into an environmentalist, she said. She began promoting recycling and car pooling at work.

Then around 2007, she received a letter in the mail from a company that wanted to lease their mineral rights. When the signing bonus grew in the thousands she and her husband accepted the offer.

“At the time we signed, I was apprehensive,” she said. “I thought ‘Surely this is safe or they would not be doing this.’”

However, she began to have doubts and did some research about gas drilling.

She began following Sharon Wilson, aka Texas Sharon, the notorious North Texas anti-gas drilling blogger. Nervous about having a gas drilling site so close to her home, Feil started a petition to get it moved.

By 2010, she was a full-time activist, standing in front of the city council performing her “white lady environmental rap.” Last year, a friend encouraged her to grow her following, so she started a blog that now draws about 500 hits a week.

Earlier this year, she ran for city council, she said, in order to have a public platform for her views.  While she has met other local environmentalists, she has not joined forces with any environmental group and has continued to fight gas drilling solo.

Grace Darling, president of the Arlington Conservation Council, a coalition that has taken on gas drilling in the past, said some members of ACC may agree with Feil’s views but the organization has different strategies and tactics.

Darling, who lives across the street from 22 natural gas wells on the University of Texas at Arlington campus, said the nonprofit was active when gas drilling began in Arlington. ACC members spoke before the city council and presented a list of recommendations to make drilling safer. The group also lobbied against drilling at some locations, including near a nature preserve. The group continues to monitor gas drilling but sees the issue as an uphill fight.

“We’ve been doing this for years,” said Darling. “We don’t try to lobby things we know we’re going to lose. We really pick our battles.”

Don Young, founder of Fort Worth Citizens Against Neighborhood Drilling Ordinance, said Feil came forward as an activist just as he was pulling back, resigned to the issue like Darling.

“I think it’s admirable that she is keeping going in the face of what appears to be a hopeless situation. I think there’s still plenty to say about the issue.”

He acknowledged that Feil has put some people off with her edgy approach.

“Most people saw her as a nut case with her Ben Zene doll. She’s acting instinctively. She knows this is wrong and she’s trying to get people to listen.”

Feil, too, admits she accepts gas drilling as inevitable. Now that fracking has started in her neighborhood, she said her main goal is to make it as safe as possible. She said she has tried repeatedly to talk to her city councilman, Charlie Parker, about installing the latest safety equipment, including a ventless flowback tank, but said she has received no response. He declined to comment for this story.

Lately, she has been intent on going back to work part-time and plans to get back to other interests she let slide before gas drilling took over her life. But she said she’ll continue the fight.

“I pray a lot,” she said. “I just can’t do this by myself. It’s going to take strength in numbers.”