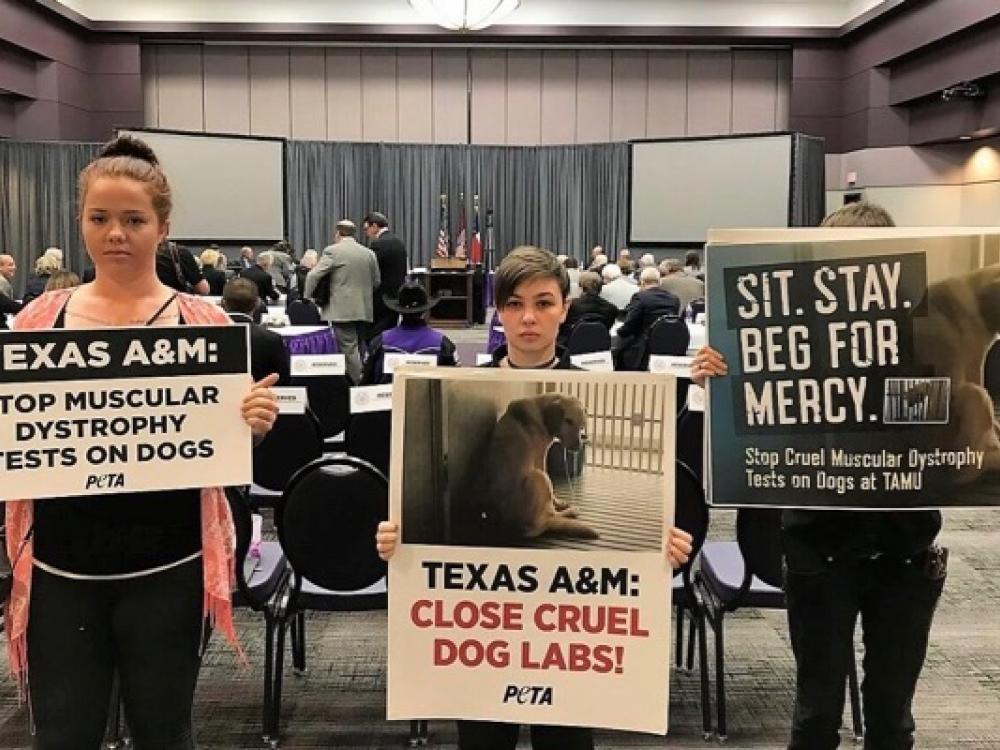 PETA supporters disrupted a Texas A&M University Board of Regents in Stephenville on Thursday, calling for an end to experiments on golden retrievers at the university.

PETA supporters disrupted a Texas A&M University Board of Regents meeting at Tarleton University in Stephenville on Thursday, calling for an end to experiments on golden retrievers.

Dr. John J. Pippin, a Dallas-based doctor and director of Academic Affairs for the Physicians Committee for Responsible Medicine, was among the doctors and veternairians who say that the experiments are not justified. According to PETA, for more than three decades, the experiments have produced no meaningful treatment for humans with muscular dystrophy while crippling and killing dogs in the process.

“I don’t consider these experiments to be ethical under any circumstances. But given the futility of this approach for DMD, the ethical violation is egregious,” said Pippin in a statement.

Pippin, a former animal researcher, added that animal experiments like this have only rare and random relevance for human diseases, and thus do not meet the definition of science.

“It’s well-known now that even small differences in genetics, physiology, and even anatomy (rats don’t have gall bladders, right?) can scuttle animal experiments.”

He emphasized that animals (including dogs) have been used for at least six decades without resulting in any useful DMD treatments, adding that that the recently approved drug eteplirsen doesn’t work.

“Its approval is a reflection of the desperation that has resulted from decades of dead-end animal experiments.”

PETA was given video footage showing dogs who struggled to walk, swallow, and even breathe in the university's laboratory. Those who didn't exhibit symptoms of canine MD but carried the gene for the disease were used for breeding—and were left to gnaw on their cage bars and pace frantically on the hard, slatted floors. Innovative, animal-free research methods are widely available for studying MD.

PETA's petition has received support from scientists, who have criticized the experiments' inapplicability to human patients; public figures, including Miami Dolphins quarterback and TAMU alumnus Ryan Tannehill and commentator Bill Maher, who called TAMU MD experimenter Joe Kornegay "dogs' worst enemy;”and patients suffering from MD who have proclaimed that they don't want animals to suffer in their names.